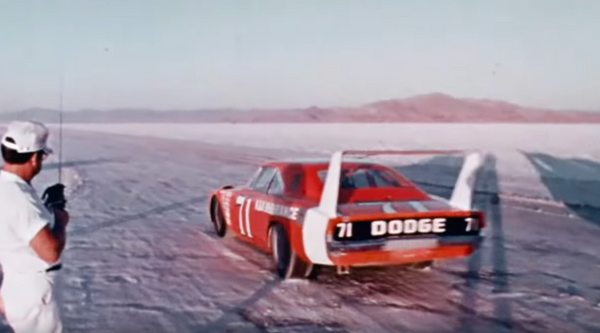 They didn’t do it on a track…

The Dodge Daytona and Plymouth Superbird were incredibly non-traditional cars for their time. Sure, people knew about aerodynamics, but the extreme looks of the big nose cone and that massive wing in the rear was unbelievable. After smoking the competition and setting speed records in NASCAR races, most notably at Talladega, both muscle cars were banned from competition for the 1971 season. It was a slap in the face for Mopar, but a couple of drivers and their team got the last laugh.

As you can see in the included short documentary, Harry Hyde and Bobby Isaac use a 1969 Dodge Daytona to set speed records out in the desolate Bonneville Salt Flats. Instead of whining about the lemons given to them by NASCAR, these guys took the bull by the horns and found a way to keep squeezing value of the car. In the process, they made even more of a name for themselves.

Of course, Bobby Isaac already had quite the reputation. He had risen up from dirt track racing to win 11 races in 1970 and grab the NASCAR title. The man was an idol for so many, and while his skill unquestionably was amazing, his Dodge Daytona was also a secret weapon. When that was banned, he could have become bitter and just quit driving or used his considerable financial resources to smear NASCAR. Instead, he decided to do something better.

Like the story of how Ford used the GT40 with the help of Carroll Shelby to beat Ferrari at Le Mans, this is a tale of ingenuity and grit in the face of adversity. Of course, while Bobby Isaac and Harry Hyde were the ones literally risking life and limb pushing the Dodge Daytona to its limits, there was a whole crew there making this miraculous attempt a reality. It’s a great story and definitely worth the 16 some-odd minutes of your time, so check it out.