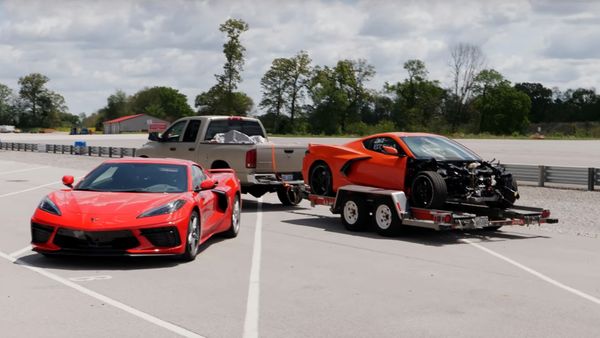 The LT2 V8 survived, but not for long!

Well that didn't take long. Not only is this gorgeous C8 Corvette believed to be the first customer-purchased car to get wrecked (just a day after it was purchased!), but soon it could very well become the first mid-engine Corvette to get an engine swap. And it's definitely not the swap most people saw coming.

This Corvette had just 200 miles on it when it was t-boned a Hyundai that was driven by a suspected drunk driver who had carelessly pulled out in front of this car, and it was serious enough of a collision to deploy airbags and cause heavy front end damage. About a month later, YouTuber Rob Dahm bought the wrecked Corvette and its accompanying pile of parts.

While he plans on starting the project by rebuilding the Corvette, Dahm's plans are ultimately to pull out the C8's dry-sump 6.2-liter LT2 V8 and replace it with a four-rotor engine and all-wheel drive. On his way back from Florida, he stopped at the National Corvette Museum as part of his "apology tour" for his unconventional engine swap. It will be interesting to watch this wrecked Corvette get put back together before being ripped right back apart.

Only about 2,700 C8 Corvettes were produced before the COVID-19 pandemic caused the Bowling Green plant shutdown, so these first-year C8s are definitely going to be rare. Examples of the all-new 2020 Chevrolet Corvette have already starting to his the resale market, and they are selling extremely fast.

Be sure to stop by the Motorious Facebook page to let us know what you think of a rotary-powered C8 Corvette.