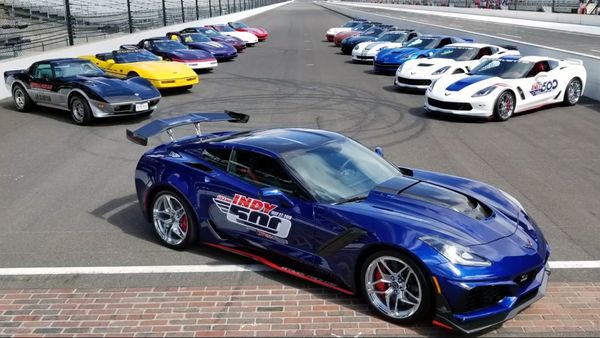 A look at 42 years worth of Corvette pace cars.

The Chevrolet Corvette first acted as pace car for the Indianapolis 500 in 1978, and since then, it has gone on to lead that race to the green flag more than any other car. In its latest episode of Vetteacademy, the National Corvette Museum gives brief look at the 17 unique Corvette pace cars that have been used over the last 42 years.

For the Corvette's first time pacing the Indy 500, Chevy had initially planned on making just 300 pace car replicas, but due to strong demand, that number ended up being 6,502. You can find a variety of these '78 Corvette Pace Car Editions with very, very low mileage including this one with just 14 miles! Eight years later, the Corvette convertible acted as the pace car, and while the official pace car was yellow, all 1986 Corvette convertibles (7,315 in all) were considered pace cars even though many didn't have the decals installed. The 1995 and 1998 pace cars were produced in far lower numbers (527 and 1,100, respectively) making these versions more collectible.

In 2002, Chevrolet became the exclusive provider of Indy 500 pace cars, and that year the 50th anniversary Corvette was the pace car; no official replica was produced, but Chevy did create a graphics package for 300 customers. The Corvette paced the race in 2004, 2005 and 2006, but no replicas were built these years either. It was until 2007 that Chevy offered pace car replicas again when it produced 500 examples – all convertibles – that year. In 2008, there were actually two Corvettes acting as the official pace car – a custom Z06 made to run E85 gas and a black and silver version to commemorate 30 years since the 1978 pace car – with 500 production replicas of the latter being signed by Emerson Fittipaldi.

From 2012 through 2019, the Corvette acted as the pace car another six times. Chevrolet hasn't announced which model will pace the 2020 Indy 500, but this race has been delayed until August 23rd due to the COVID-19 pandemic.