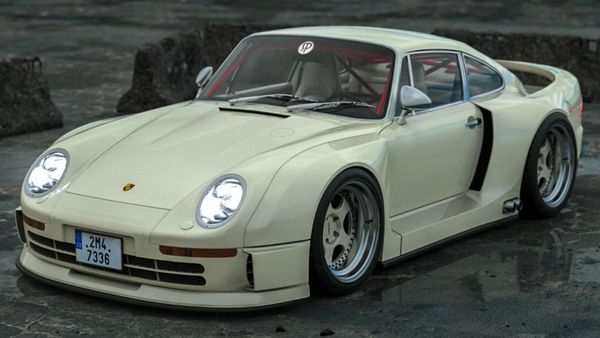 Messing with a holy grail like this is dangerous.

Some cars are so legendary that messing with them, even in just a digital rendering, could prove disastrous. Of course, we’ve covered plenty of these ill-advised renderings before, which can be found all over Instagram. This time we bring to you a Porsche 959 given a widebody treatment.

These days, the rage among artists is to give a vintage car a widebody kit in a rendering. The good thing about this is it lets everyone see just what a mistake doing such a thing to a vehicle in real lifemight be. Among the changes here are the flared-out fenders, big scoops we assume for cooling the brakes and engine, plus a roll cage in the cabin. Oh, and the car is wearing deep-dish wheels, because yeah. What really doesn’t make sense is the side-exit exhaust ahead of the driver’s side rear tire. We’re gonna go out on a limb and say the artist isn’t really familiar with the layout of the 959.

While not as wild of a departure from the original aesthetic as some other widebody renderings, particularly of classic American muscle cars, not everyone is going to like the outcome. After all, the Porsche 959 is considered by many to be far more than just a vehicle.

Back in the 1980s Porsche wanted to go rally and circuit racing with a supercar to absolutely blow away the competition. Starting with its successful and popular 911, engineers elongated the car and added what was then super-advanced technologies which eventually transformed the auto industry. Among the revolutionary onboard systems was all-wheel drive, sequential turbos, four valves per cylinder, composite body panels, and more.

You could easily argue the Porsche 959 accurately predicted automotive performance of the future. Because of this, many feel the car shouldn’t be messed with by anyone. They probably don’t know Canepa has been creating Reimagined SCs, which are 959 restomods. Still, those cars stick to the essence of the original. This rendering, on the other hand, doesn’t.