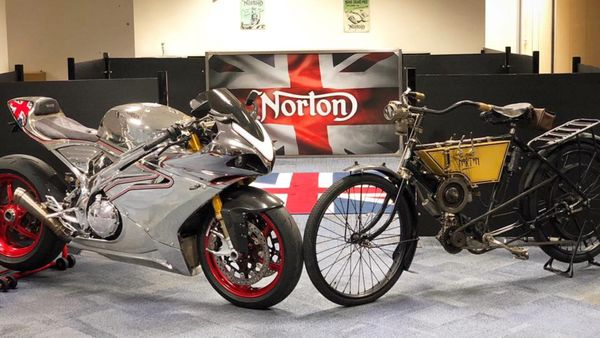 Norton is no longer last man standing on the island nation.

Last week Norton’s parent company, BDO, announced the long-standing British motorcycle brand has been purchased by TVS Motor, based in India. While the announcement has been tough for fans to swallow, it’s hardly a shock. Norton’s future has been pretty hazy for some time. No doubt enthusiasts will be debating whether or not it would have been better for the brand to have gone quietly into the dark night. Perhaps a startup will take its place at some point.

There are few truly British motorcycle brands remaining these days. The downfall of Norton has been blamed by some on Stuart Garner, the former owner who left the company in deep debt totaling millions of pounds. India is currently the biggest motorcycle market in the world with 18.5 million sales last year.

Way back in 1898 Norton was founded and has been one of the symbols of British pride since. In fact, it helped with military efforts during WWII, making almost 100,000 Model 16 H and Big 4 motorcycles for soldiers to use.

There are many memorable Norton models from the past century-plus, like the Manx, a 500cc racing motorcycle made starting two years after WWII and running all the way to 1962. Another one is the Norton Commando, a bike with a 745cc OHV pre-unit parallel-twin engine, which was isolastically insulated from the frame to eliminate vibration, a big deal back in 1961. Factory teams won many races, including at the Isle of Man Senior TT and Grand Prix. To say Norton had an impact on the worldwide motorcycle community would be spot-on.

Some are celebrating TVS for saving the Norton name, while others believe what’s coming will only sully it. According to TVS, it will be using the British brand to “scale globally.” At the same time, the Indian company promises to retain the “distinct identity” everyone knows.

No information has been provided about what will happen to customers who have outstanding orders on motorcycles.