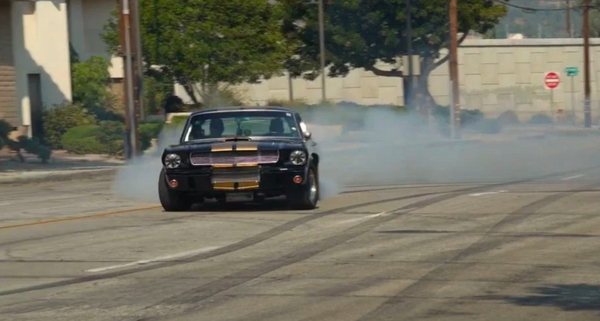 The American race car driver does not take it easy on his Hertz rental car.

Many decades ago, Shelby and Hertz partnered together to create a rental car version of Ford Shelby GT350. The result of the venture was the Mustang Shelby GT350H, and several examples ended up in the hands of private ownership after the program ended. One of those cars happens to belong to former stock car racer, Tony Drissi. Once the American driver got the GT350H, he transformed it into a mean street car, far elevating the performance from once it what was.

Most GT350H examples are kept in restored condition, but this example is beefed up to race-spec, getting a complete roll cage, a racing bucket seat, and extremely modified engine. While the factory 1966 version originally left the production floor with a 289 Cobra V8 that made 306-horsepower, but that’s been amped up too. The current powertrain makes 500-horsepower with a bored 302, built for racing.

Tony Drissi’s Shelby GT350H is car number 33 of the 1,001 GT350Hs made, and Drissi explains that 33 is actually one of his favorite numbers. The ex stock car racer has owned this car for almost two decades, and he says he enjoys driving the beefed up Hertz car on the road, even though it’s built for the track.

Host Shawn takes to the passenger seat, like he does in most episodes of AutotopiaLA, and Drissi does not disappoint once out on the open road. He put on quite the show, drifting and doing donuts on the road - it was quite the smoke show!