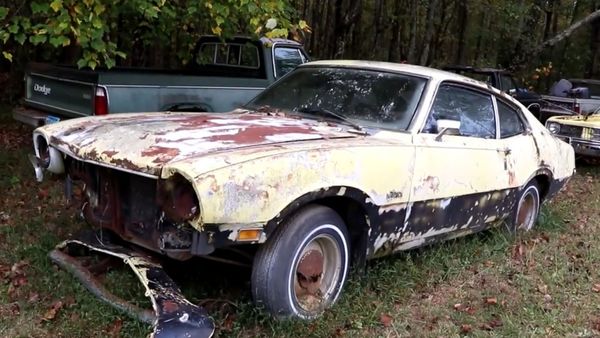 It’s always fascinating and horrifying when someone decides to make an old car a part of their lawn decorations. While we don’t understand what possesses a person to just park a car on their lawn and leave it, it’s great when we see one rescued. Sure, this 1970 Ford Maverick isn’t the most exciting vehicle ever made, but the guy who buys it and tows the thing away sure seems excited, so that’s good. However, he has a lot of work ahead as he tries to get the car running.

This Maverick has been sitting on that lawn unmoved for 26 years. The engine apparently seized. You never know just how bad it is until you try to crank it. Worse case, you have to crack the engine open and see how bad the damage is. Later, you get to see him deal with frozen spark plugs, ignition issues, and other problems when he tries to fire it up.

Just getting the car onto the trailer presents a challenge since all four wheels are locked up, some of the tires are buried in the ground, etc. When a vehicle has sat for so long, getting it moving again can be difficult.

There is an interesting story behind this Maverick. Apparently the first owner was stationed in Germany and took the car with him. He drove it the whole time he was overseas. He told the new owner that he parked the vehicle since the front end was having problems, and as you can see in the video the alignment is definitely off. However, the guy seemed to have cared for it since he had the license plate, front bumper, grille, etc. all set aside.

Would you take on a project like this? What would be a fair price for taking a vehicle like this off someone else’s property?