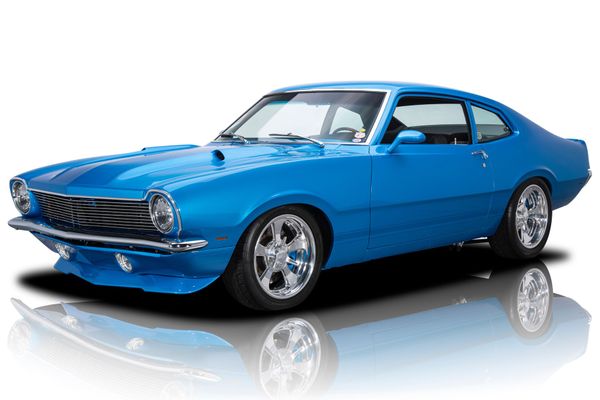 Ford's Maverick isn't one of the great muscle cars, but with a little work, it can be one of the coolest machines on the street.

The Ford Maverick, despite its humble roots as a compact, may be one of the most handsome Fords of its era. They've endeared themselves to generations of enthusiasts, and they make great low-buck project cars.

Prices for nice examples are steadily increasing, which means that the era of the cheap Maverick project is coming to a close. The good news, though, is the proliferation of incredible builds like this one.

This Maverick grabs your attention right away with its Venom Blue paint and aggressive stance. From the scooped hood with ghost stripes to the 18" Billet Specialties wheels, it's clear that this Maverick means business.

Under the hood, you'll find a built 302 making 340 horsepower. Given that the Maverick weighs in at around 3,000 pounds, that's a more than respectable power to weight ratio.

Power is sent through a built AOD four speed automatic, then into an 8" axle with steep 3.80 gears. This thing is probably an absolute blast to drive.

Up front, you'll find a custom, Mustang II-style front suspension from Rod & Custom Motorsports with coil-over shocks. Out back, you'll find lowering blocks to get the stance just right and traction bars to keep the rear end planted when you press the go pedal.

Inside, there's a classy houndstooth motif on the doors, which continues on to the reupholstered SN95 Mustang seats. It's a stylish interior, but it's likely to be a comfortable one, too.

If you want to make this Mustang yours, you can find it at RK Motors in Charlotte, North Carolina. For just under $60,000, you'd be hard-pressed to find a nicer Maverick anywhere.