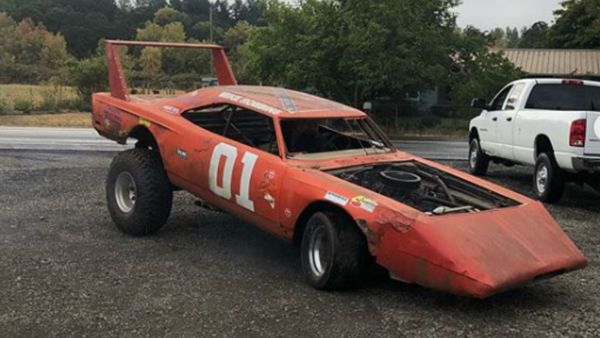 It was only a matter of time before this happened.

Not too long ago, a mysterious Plymouth Superbird painted to look like the General Lee, but with a severely raked stance showed up in Salem, Oregon. The Dukes of Hazzard wanna-be mystified some people, including Instagram account mopars5150, which seemed to speculate at the time it was some sort of rat rod. However, to those familiar with tractor pull competitions this car is already a bit of a celebrity.

Usually, what competes at these events are tractors and pickup trucks. Depending on what class they’re in, these vehicles can be unbelievably powerful and purpose-built for pulling the sled just a few inches more than the competition. The fact there’s a muscle car out competing with vehicles which were designed from the factory to tow heavy loads is pretty miraculous.

Proving this rugged Super Bird didn’t just materialize, there’s a video on the Lucas Performance Diesel & Offroad page of the car at a competition in 2018. The muscle car managed to pull the sled 100 feet exactly, so not a bad showing!

This car was also featured in a Lucas Performance Diesel & Offroad Instagram video, also a little over 2 years ago.

Obviously, there’s no way a Superbird could ever look just like a 1969 Dodge Charger. But the orange paint, “01” painted on the doors, and the Confederate flag on the roof make it obvious what intentions the owner has. Plus, they even nailed the “General Lee” written on script on both sides of the roof, a detail so many seem to miss.

We’re pretty sure this isn’t a real Superbird but instead is a Road Runner which has been modified to look like one. The rear wing seems a little suspicious, plus the nose cone doesn’t have the built-in flip-up headlights (among other details), so that’s why we think it’s a Road Runner dressed up to look like the famous NASCAR stock car. Plus, clean Superbirds can sell for a lot of money these days, so we doubt anyone would abuse one like this, even in good fun.