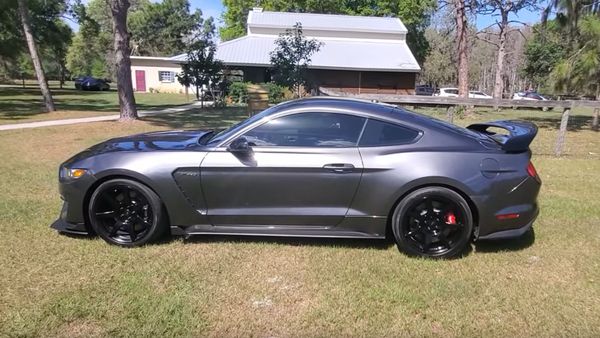 Not everyone is going to agree this is a good move, but to each their own.

A lot of people love the modern Shelby GT350Rwith its flat plane-crank Voodoo V8 engine, which sounds just unearthly, carbon-fiber wheels, etc. It’s a true track toy with few comforts, although it’s not nearly as stripped-down as the original. Also, this modern muscle car is a hot collector’s item, so a lot of people buy these and keep them absolutely perfect in hopes of making a ton of money. That’s why it’s shocking to see someone yanked off factory parts from a GT350R and installed aftermarket mods. Don’t worry, though, because Samcrac is restoring everything to factory spec

You might not believe this, but now has been the best time ever to buy a Shelby GT350 since the cars launched. As Samcrac explains, the launch of the C8 Corvette and Shelby GT500 have stolen the spotlight. Some people are even dumping their old Shelby to get one of those new cars.

However, the GT350Rs are far rarer, thanks to Ford seriously limiting production. You’d hope the higher price and exclusive nature would prevent people from ruining such a track-focused vehicle, but then if you see what happens to Lamborghinis you’d know better.

The previous owner slapped about $15,000 of modifications on this Shelby GT350R with the aim of improving track performance. Samcrac said that devalued the car so much it was worth the same as a regular GT350 on the market. Yikes.

If you don’t want to do the math, that’s about a $20,000 drop in value. However, the guy who owned it actually took the car to the track, unlike collectors who have a track-ready car with 120 miles on it and have never dared do one burnout. So which is worse?

Topping the list as the most expensive mod for the Shelby are AP Racing lightweight brake calipers and rotors for the front. The setup drops 29 pounds of unsprung weight, which is incredible, but the $4,400 price tag is hard for a lot of people to stomach.

Thankfully, the previous owner was smart and kept all the OE parts he removed, because that’s a good idea. The second owner might really thank you for doing so, plus it’s a good selling point if you don’t want to remove the modifications before listing it for sale.

What do you think about this Shelby GT350R and its modifications? Should a car like this be kept stock for resale value or modded and tracked for the fun of it? Sound off below.