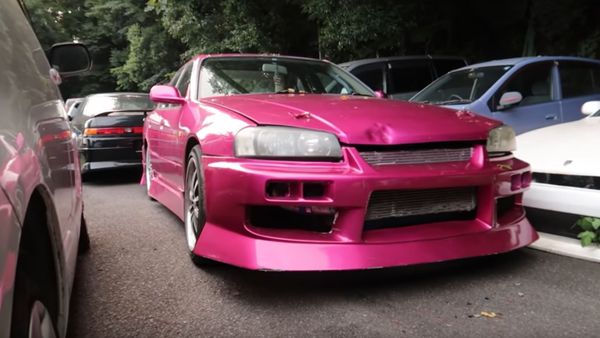 Tucked away in Yokohama is a collection of some incredible rides.

With increasing interest in JDM cars, there are more foreigners working to uncover amazing stashes in Japan. YouTuberSammit doesn’t just take vacations to the island nation, the British national actually lives there. He’s really taking the “when in Rome” advice to heart and is currently being coached by local professionals on how to drift a car properly, a trend which started in Japan. But that’s not the point of this article. Instead, we’re focusing on the amazing “barn find” cars he uncovered with the help of a friend in Yokohama.

Don’t laugh at the beginning of the video, because the guy is freaking out at a modified Honda Fit (called the Jazz in certain markets). It’s been lightweighted big time with the interior stripped down to the bare bones and a single racing seat left, but that’s not what we’re all interested in seeing.

Right after that we dig into a rare JDM gem: a Toyota Chaser Tourer V with a manual transmission. We don’t have anything quite like it here, but this car has the 2.5-liter 1JZ-GTE inline-6 engine with about 276-horsepower and 278 lb.-ft. of torque. It’s a nice little performance sedan and something enthusiasts lust after, plus it’s now legal to import to the United States.

From there is a lineup of fairly abused Nissan Skylines, Nissan Sylvias, another Toyota Chaser, Mitsubishi Evolution 6 Tommi Makinen (unfortunately with some collision damage), Mazda Miatas, a weird assortment of vans,  We apologize in advance for the erratic camera handling. It might make you feel a little dizzy or angry after a few minutes, so we wish the guy knew how to hold the camera steady.

If you’re wanting to learn more about Japanese car culture, which has many sub-genres and interesting quirks, Sammit is one of many good channels to follow on YouTube.