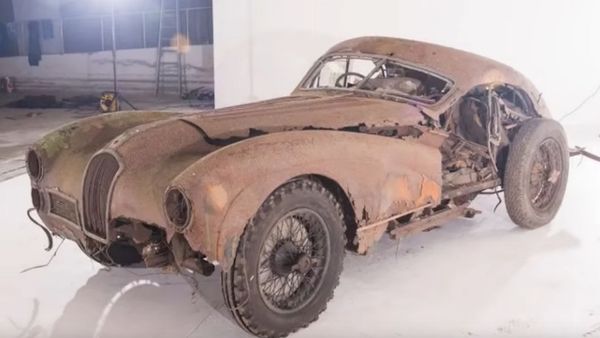 Yes, not all were literally found in barns, but they’re all of barn-find condition.

Automotive enthusiasts and even regular people are absolutely fascinated with barn find cars. It’s not too difficult to understand why since they’re similar to buried treasure. After all, if someone shoves an old car in a barn, garage, basement, or wherever else and piles junk all around it, once they die and the car is discovered it’s like digging up gold. That’s especially true of the 12 cars featured in the video below.

Each one of these Porsches, Jaguars, Mercedes, Aston Martins, etc. were essentially left to rot, plus they’re worth jaw-dropping amounts. It’s always curious when someone essentially buries a regular car, but when it’s a vehicle worth a considerable amount from the get-go, you have to ask why they wouldn’t take better care of it?

Obviously, if you’re going to store a car you need to do so with care. Buy a cover, stabilize fluids, keep it somewhere dry, etc. Not everyone is mindful of these factors, showing that money does not buy sense, even though it can buy expensive cars which are subsequently ruined. What these 12 barn find cars sold for is almost unthinkable, certain ones even crossing into seven-digit territory.

Some of these cars have been modified, including the original drivetrain being swapped out. Missing factory equipment really knocks down the value of your vehicle, but a lot of non-car people don’t seem to understand that.

What’s even more amazing is people who pull these wrecks out of wherever they were stashed and expect top dollar. Even if the cars are absolute classics and worth quite a bit, their condition doesn’t justify paying as much as you would for one in pristine condition, whether original or restored. Again, that seems obvious to most, but either some of the sellers don’t get it or they’re of the grifter variety.

What do you think of the cars in the video above? Are there any you would’ve been willing to pay top dollar to own, despite being a “little” rough? Leave a comment below.