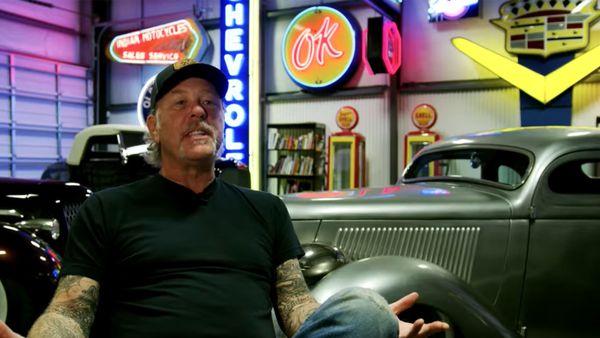 Metallica’s lead singer is quite the car nut.

Rock star James Hetfield is a big time gear head. He has an impressive collection of customized classic cars in a massive, decked-out garagethat will make anyone drool. Thanks to Petersen Automotive Museum we get a view of his cars, garage crammed with automobilia, and even the man doing some tinkering on camera.

According to Hetfield, customizing cars and making music have a lot of similarities. Both allow a person to express themselves creatively. That individual expression is then put out where others can appreciate it.

You’ll also see in this video Hetfield has a lot of awards from car shows, including a dizzying number of honors from Goodguys. That alone should prove the musician isn’t just a casual car owner.

As is the case for many car nuts, Hetfield said he was around vehicle projects from the time he was young, thanks to his father. He would bring home not only cars but boats and other things to fix and tinker with. Growing up in southern California, he was also surrounded by peers who were into car culture.

Tragically, Hetfield lost both of his parents by the time he was 16. He said joining a car club gave him a sense of family. One can’t help but think about the Fast and Furious movies which has resonated with so many for some of the same reasons.

There are a lot of unicorns in Hetfield’s collection, like his 1937 Lincoln Zephyr, 1934 Packard Aquarius, 1937 Ford Coupe, 1948 Jaguar Black Pearl, and 1936 Auburn. Every ride has been seriously customized, some featuring incredibly intricate pinstriping. How many of his other cars can you identify in the video?

Part of the reason Hetfield did this video with Petersen Automotive Museum was out of a desire to share his car collection. In case you don’t remember, the rocker displayed 10 of his vehicles at the Museum starting on January 31.