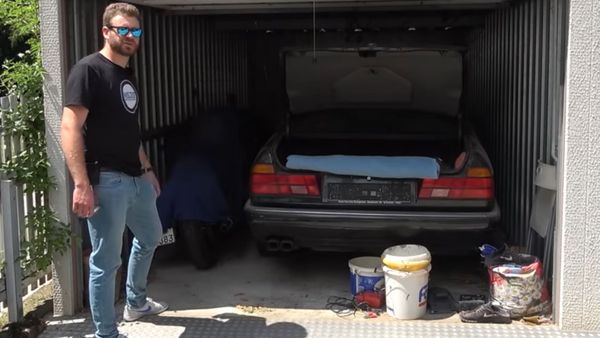 This is a true treasure of Bimmer history.

YouTuberM539 Restorations recently took a trip to the southwestern part of Germany to see a 1989 BMW E32 750iL with a mighty V12 engine stuck in a garage for years. Yes, this is what gearheads do for vacations. He was specifically invited to check out the car by the owner because it’s no longer running and the guy thinks it should be passed on to someone who will fix and enjoy it. Lucky him!

There’s a lot to get excited about with the E32, other than the big thumping V12 engine. Like now, BMW used the 7 seriesas its test bed for the latest technologies, so by opting for the big sedan drivers get the latest and greatest. In this case, it was the first Bimmer to come with electronic damper control, traction control, plus dual-zone climate control. BMW also blessed the E32 with lens projectors and xenon headlights, a first for the industry. Yeah, those don’t seem like a big deal today, but in a time when many cars were sold with window cranks, such features were incredibly advanced.

Since this is an L model, which means the long wheelbase for people who were driven around, it came with a car phone and fax machine. That was the ultimate in connectivity back then, versus today where there are cars which receive over-the-air updates at night just like your phone. A wine cooler, heated door locks, and heated windshield washer nozzles upped the luxury factor even further. In other words, the E32 marked a lot of important innovations for BMW and cars in general which we kind of take for granted today.