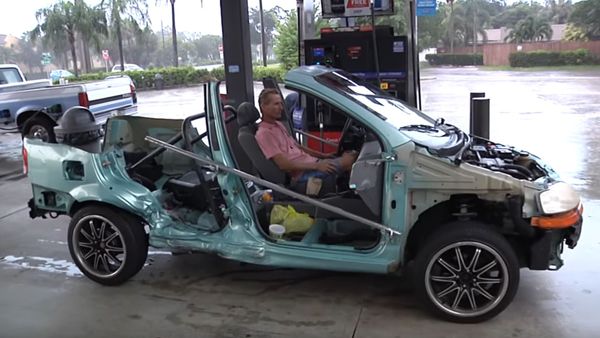 Jeep owners, eat your heart out!

When you’re laying in bed dying of COVID, probably one of the last thoughts you’re going to have is “man, I should’ve cut that wrecked car up and made a hillbilly racer.” At least one Florida man thinks that’s what would’ve happened had he not taken the plunge and started hacking away at what was otherwise a mostly whole vehicle.

We’ve seen a lot of bizarre custom vehicles, from a diesel-powered Mustang to a blinged-out semi-truck. However, none of them are nearly as hilarious as this video of a guy in a chopped mystery car sitting at a gas station. Before you read on or watch the video, take a guess about what this thing was before it went under the knife, because if you nail this you’re well-versed in crappy cars.

The Florida man didn’t really think ahead about his project. What started out as a vehicle with side collision damage turned into a permanent convertible. Did this guy not think about how it rains a lot where he lives? To hear him describe why he chopped apart the car doesn’t really answer any questions other than what a slower-talking, real-life Boomhouer would be like (and we’ve really been wondering about that for a while).

Of all the weird things, the guy focuses on the fact this car has working AC. It gets hot in Florida, but with no doors or roof, air conditioning isn’t going to do much. He also removed all the seats except for the driver’s maybe because everyone wanted to ride in his car – wouldn’t you?

Somehow chopping his car has something to do with women breaking nails and people sleeping in their van. This is the most meandering, random interview ever.

Before you think a chopped Chevy Aveo would be some performance monster, know that it wouldn’t be. Apparently, this guy thought lightweighting the thing would be a game changer, but he says it tops out at 95 mph on the freeway. The fact he’s brave or stupid enough to even take it on the freeway, let alone drive the car at that speed is astounding.

As a warning, there’s brief language in the video, so if you’re offended by that or are near people who are, plan accordingly.