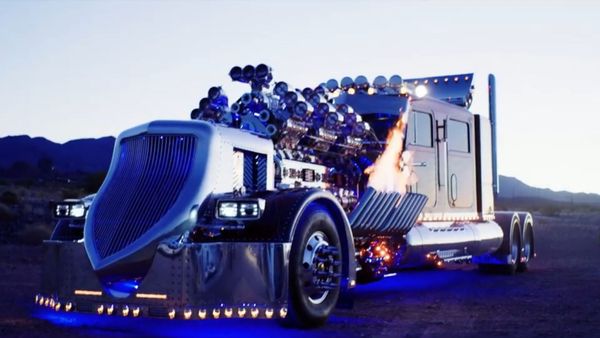 This truck will definitely leave you staring for a long time.

There are crazy builds, and then there are completely insane, out-of-this-world. Thor Truck is obviously of the latter of the two. Built by Mike Harrah over the course of seven years, this semi is packing 12 superchargers and 3,974-horsepower. Matching its extreme ways is the extreme price it fetched at auction, $13.2 million.

In the beginning, Thor started off as a 1984 Peterbilt 359 Ultra Custom TT Crew Cab. If you know your trucks you can see that, after you look past the many customizations. One of the most prominent features is the two 14.0-liter Detroit Diesel engines with 12 superchargers bolted up, plus the rows of exhaust pipes on both sides. As the flames shoot out things get pretty wild. If that’s not enough, this thing is packing nitrous.

To fit those engines, the front end of this Peterbilt was stretched quite a bit. Thor measures 44 feet long, plus it tips the scale at a whopping 32,000 pounds. This thing wouldn’t even be legal to drive on quite a few bridges. Of course, it’s really built for showing off and maybe hitting the drag strip, which is what the four 12-foot parachutes around back are for.

All the aesthetic touches are what really turn heads, although the whine of the superchargers sure doesn’t hurt. Chrome all over the bumpers, massive front grille, engines, superchargers, exhaust pipes, chassis, and just about everywhere else imaginable is just the start.

The cab is red with flames down the sides, almost evoking a Transformers vibe. Broad swords are mounted vertically between the doors, but using those as grab handles might turn out poorly. There are a lot of other details, but the mural on the back of cab portrays Thor and some other people in “Viking” garb fighting. It’s so kitsch the art on this semi could’ve been lifted off an 80s D&D manual cover.

There are a lot of big claims swirling around Thor, like that it’s supposedly the most power big-rig ever built.” But more importantly, what do you think of this custom semi? Is it amazing or awful? Leave a comment below.