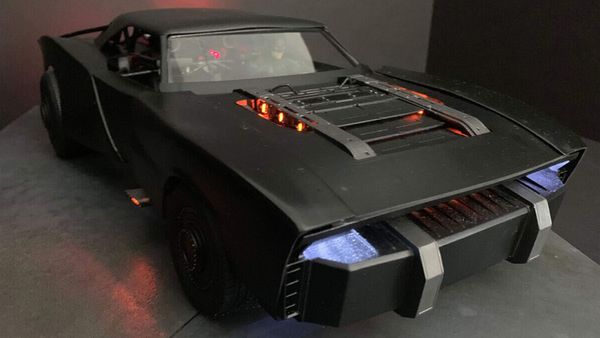 Just when we thought 2020 couldn’t possibly get any worse…

As one of the most popular superheroes of all time and an iconic symbol, people understandably are pretty critical of how Batman is portrayed. If you’re also a gearhead like us, you’re especially focused on what the Dark Knight drives. Everyone has their favorite Batmobile, but there’s a strong possibility that not many people will put this latest big screen version of Batman’s ride on their top ten list, even though it’s more muscle car than before.

Matt Reeves, the director of The Batman, released these new images of the Batmobile on Twitter recently. We have a feeling the car guys (and gals) who are no doubt supposed to be impressed by this more “realistic” Batmobile are instead going to be turned off.

Reeves was already pushing it by casting Edward the Sparkling Vampire in the lead role. A cool Batmobile might have smoothed things over a little. This thing looks jankier than a high school auto shop class project. It’s a cobbled-together mess with no clearly-defined design theme.

There are several elements to this car which obviously are made to just “look cool” yet fail miserably at that. For example, the two strips protruding above the back edge of the hood, then run longitudinal before plunging below the hood line seem to serve no functional purpose. Hood cutouts show glowing red lights possibly where the cylinders would be located if the engine wasn’t located in the rear. What actual purpose would those even serve? They shine through the front grille too, the part that’s not obstructed by the really strange-looking bumper. Batman’s supposed to be stealthy, not give the bad guys glowing red lights for more precise aiming in the dark.

Speaking of glowing red lights, what looks like a side exit exhaust located just behind the front passenger tire also has that unnecessary illumination like a rice rocket from 2002. Why didn’t they just give the Batmobile an underglow kit to complete the effect? Around back, Batman has installed many, many red lights, just in case the bad men couldn’t successfully shoot the Batmobile before he blasted past.

Then there’s the exposed engine in the rear. Things get really confusing with the world’s most complex and nonsensical exhaust system which seems to include two exhaust stacks coming off two of the ports, two open headers on either side of the engine, and four headers which collect at the glowing LED bad guy target shooting light.

We admit when the rumors first came out that the new Batmobile would be more muscle car we were intrigued. Then when the initial shadowy pictures of Batman’s fresh ride were released, we weren’t sure what to think. Now that we get to see this model of it in full illumination, we’re rushing to wash out our eyes.

This is the grittier, more “reality-based” Batmobile we deserve for acting up in 2020. In all honesty, since this is just a model of the car, maybe just maybe the final product looks better. There are some notable changes we can pick out in the shadowy production photos, mainly to the nonsensical exhaust looking more realistic, although the array of red lights are pretty much the same, except for the ones under the hood being gone, thankfully.

Are you impressed by what you see with the new Batmobile or no? Will you go see the movie when it comes out in 2021? Let us know in the comments.