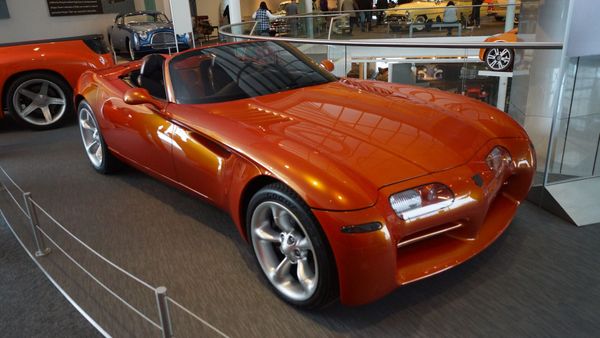 This ill-fated roadster would have been the Viper’s little brother.

In the middle of the 1990s grunge rock was huge, Michael Jordan had just triumphantly returned to the NBA, and Congress repealed the 55 mph federal speed limit. Also, Dodge was basking in the limelight thanks to the Viper, which launched in 1992. While there were some other cars in the brand’s lineup that were doing well, the powers-that-be inside Chrysler decided they needed to capitalize on the Viper’s success further. The result was the creation of the Dodge Copperhead, a concept car many have forgotten ever existed.

The whole point of the Copperhead was to provide a more affordable sports car, so why didn’t it work? There were several factors at play which ultimately doomed the Copperhead.

Dodge showed up at the Detroit auto show in 1997 with the sleek roadster, ready to wow the crowds and automotive journalists. Back then shows were supremely important, so making a splash in the Motor City would virtually guarantee strong sales for a future production model.

As hot as the Copperhead looked, the concept didn’t have it where things count the most: power. A 2.7-liter V6 borrowed from the Dodge Intrepid wasn’t exactly inspiring. It produced 220-horsepower and 188 lb.-ft. of torque, figures which didn’t excite many. This was a classic case of putting form before function, a trap automakers fall into more often than any enthusiast would like.

Things go downhill from there. The five-speed transmission was donated by the Dodge Dakota and the front control arms were cribbed from the Chrysler Sebring. Even the Eagle Talon and Dodge Neon provided components for the concept. It was a cobbled-together parts bin mess.

Looking at the Dodge Copperhead today there’s some redeeming qualities. From the side you can see it looks like a traditional sports car with the long hood, short deck/rear overhang, plus big wheels. Some of the body lines looked like a candy bar left in the sun, plus there were some wild flourishes, but the Copperhead was a concept, not a production model, so all that is easy to overlook.

As if that wasn’t bad enough, there was still something odd about the car’s design. It could have something to do with Chrysler apparently using the Austin-Healey 3000 as a design template. John Herlitz, the design head at Chrysler back then, spilled the beans to Road & Track back in the day. No doubt that alone was enough to cool the jets of Dodge fans.

Ultimately, Chrysler blamed the death of the Dodge Copperhead on the rising popularity of SUVs. The automaker had to give people what they wanted, and that apparently meant not another sports car.

Funny enough, the Dodge Copperhead concept debuted at the same time as the production version of the Plymouth Prowler. The other car as shown in concept form back in 1993, impressing both the public and journalists enough Chrysler felt confident in moving forward.

There are several lessons to learn from the Dodge Copperhead. The biggest one is when making a sports car it should look good, but above all it should perform fantastically. That doesn’t mean it necessarily needs gobs of power, but it should carve up the road, have quick throttle response, etc. Doing anything short of that will doom it from the start.