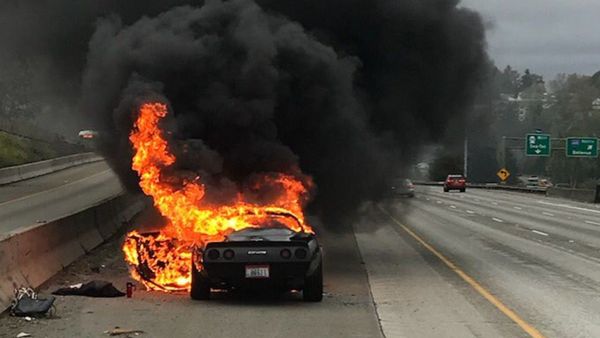 Car fires are scary since they can spread in a hurry. If you notice smoke pour out from under your vehicle’s hood or chassis, the best thing you can do is pull over and get out as quickly as possible. It looks like that’s exactly what the driver of this C3 Corvette did while traveling down I-5 in SeaTac, Washington recently.

From photos taken by Puget Sound Fire, it looks like the driver had enough time to pull off on the left shoulder. You can come up with your own theories about why the driver didn’t pull off on the right, but we think it’s because the C3 was in the left lane where it should’ve been, until it caught fire.

While it’s sad a C3 Corvette was lost, maybe forever, Puget Sound Fire did report that nobody was injured. That’s always a win with a car fire, because not everyone is so lucky.

For those who don’t know, car fires can be started in a number of different ways. It could be a problem with one of the fuel lines, faulty electrical wiring, or even a remote chance of a persistent oil leak being the cause (although that’s not likely). Puget Sound Fire didn’t release any information on what they believe started the blaze.

The next big question is what will the owner do with this C3? If it’s insured, no doubt it’ll be totaled. Maybe the owner will just ditch the car, giving someone who’s brave and/or stupid the chance to buy it on Copart and try restoring it. Or the ‘Vette might not even be worth any kind of restoration effort at this point. Since we can’t see what the aftermath looks like and the fire looks pretty bad in those photos, we’re not entirely sure what to think.