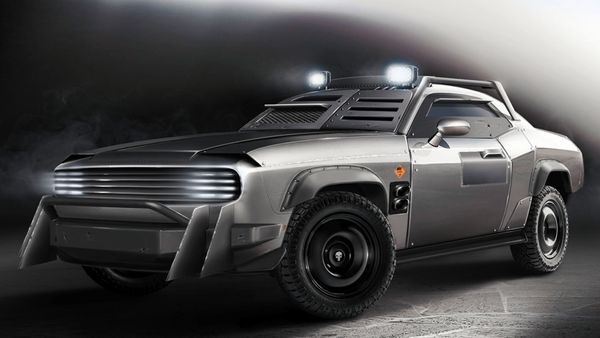 This could be useful for mowing down zombies in the apocalypse, we suppose.

People do all kinds of strange things with muscle cars, from converting them into off-roaders to painting flames down the sides. However, this concept rendering of a modern Dodge Challenger wearing some serious armor really pushes the boundaries. While this is a thing of fantasy, there is a chance for you to get your Mopar or no car fix here.

This rendering was done by JBRAY Design, which states in the brief it’s not intended for real-world use. Instead, this is a concept design for a “post-apocalyptic open world video game.” Part of the aim was to keep the Challenger recognizable despite the heavy modifications, which we think was done well enough.

Obviously, this car was made to handle front-end collisions with a fair amount of brutality. The front bumper has a bull bar and fins which look like they could slice something up. Horizonal elements protect the headlights and grille, plus welded-on sheet metal adds armor to the hood. All the windows are covered to one extent or another by panels with small openings so the driver can see. Roof-mounted lights help with forward visibility, especially since the headlights might be covered in all kinds of things, like zombie guts. Not as aggressively armored, the rear fascia apparently won’t be used for mowing zombies or whatever down.

What’s funny is there are just OE side mirrors, which anyone who’s struck an animal which has bounced off the side of their car knows how the side mirrors break like a graham cracker in a toddler’s fist. Also, you’ll note the exhaust exits just behind the front fender flare. It looks cool but could keep the exhaust from getting caught on debris on the underside of the car, which is actually pretty smart.

While this is a sketch for a video game, who’s to say someone won’t try to make this is in real life? That’s possible, given the crazy builds we see all the time.

What do you think of this Dodge Challenger built for the apocalypse? Would you want to drive this thing through the hellscape or is there another vehicle you think would be better? Leave a comment and let us know.

Check out the details of the design process here.