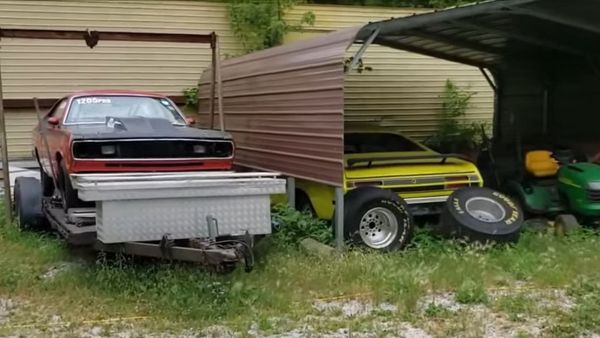 Everyone loves a good story about a classic muscle car found in a barn, field, garage, etc. Even more fascinating is when you hear of a guy who has a large piece of property and numerous Mopar muscle cars sitting around. For some it’s like the promise of buried treasure they could possibly uncover. For others the stories make them mad that anyone would let such a precious vehicle rot. But don’t judge too quickly, because this guy isn’t quite like that.

The tour of this property sets a nice tone at the beginning because you get to see the owner’s first car, a 1971 Plymouth Duster which is in excellent condition and has its original 340ci V8 with 4 barrel carb. The Hemi Orange paint, white stripe, and white interior makes it distinct. Of course, it’s sitting in the garage and is obviously the guy’s pride and joy. He’s added some mods and apparently it used to run the quarter mile in the 12s. It was also featured in Mopar Action Magazine back in the 90s. So there you go, this guy doesn’t just neglect his cars.

This guy has several other cars under shelter and in various stages of restoration or modification. It’s obvious he’s a big Mopar guy, not just by his cars but also his choice of decorations in his outdoor man cave area.

Some of the cars in this video could be worth a pretty penny, even though there’s some assembly required. To give you a taste, one is a 1971 Dodge Charger R/T 440 with the original engine and transmission.

You should know the owner of all these cars doesn’t just hold onto them forever. He knows he can’t keep them all and sells them here and there. He even admits some of them he has no love for but wishes someone would buy them as is and fix them up. If you watch to the end of the video, you can see his workshop where he has a nice array of engines, transmissions, and more.