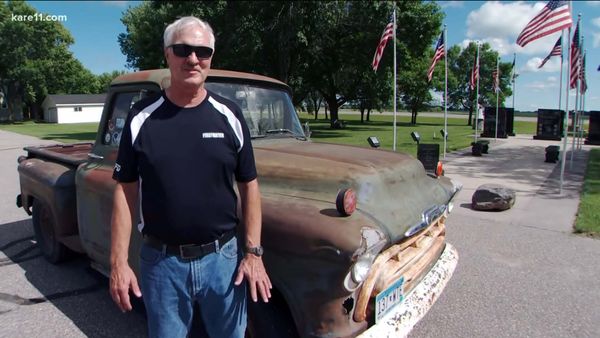 After 44 years, this truck is heading home.

Bob Sportal's 1957 Chevy 3100 wasn't much to look at, but Tom Leenstra spent over 10 years trying to buy the rusty pickup truck from its Prinsburg, Minnesota owner. It's not that the truck was rare, restored or anything else like that, though; Leenstra was hot for this Chevy truck because it was previously owned by his late grandfather, John VanDerVeen.

As the story goes, a 22-year-old Bob Sportal had purchased the Chevy truck from VanDerVeen in 1976 after the after the two men had agreed on a price of $75. Sportal spent the next 38 years daily driving the truck to his job until his retirement, which is around the same time Sportal and his $75 Chevy were first featured on KARE 11 back in January 2015. Even after his retirement, Sportal continued driving the decrepit truck around town and giving his grandkids, but his wife's weekly reminder of her need for storage space finally got Sportal to consider selling the truck.

When it came time to sell, VanDerVeen's grandson, Leenstra, has been waiting for this opportunity for some time – between 10 to 12 years by his account. These days, a classic vehicle that is running and driving is at least worth more than the several hundred dollars a scrap yard would pay for the vehicle, but instead of focusing on the money, Sportal focused on what the truck meant to Leenstra and sold the truck to him for just $75. Yes, 44 years after negotiating the sale with Leenstra's late grandfather, Sportal sold the truck back to his family for the same price. That wasn't exactly a wise financial decision, but it's a great story of paying it forward in the classic car community and, perhaps more importantly, keeping your wife happy.

Of course, at the end of the day, this '57 Chevy is more than just a truck as Leenstra says "it's like riding with his grandpa again."