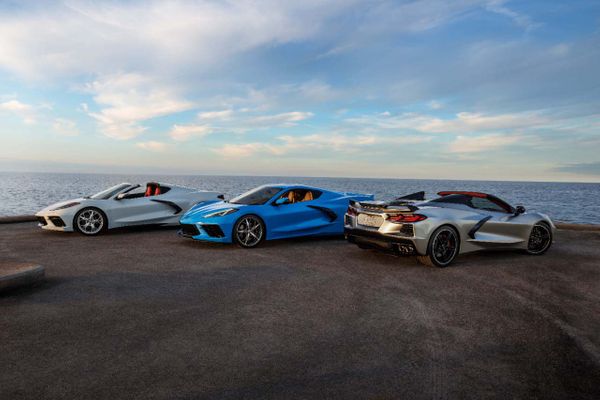 If you weren't fortunate enough to secure a one of the first-year C8 Corvettes, it sounds like there still might be some time to buy one, but if you can wait, the 2021 Corvette is adding some new color options that will probably appeal to vintage racing enthusiasts. After posting a teaser video on social media, Chevrolet has confirmed changes to the C8 Corvettes sophomore year, which is mostly limited to a broader color palette and added content.

For 2021, the mid-engine Corvette is getting two new body colors (Red Mist Metallic and Silver Flare Metallic) to go along with seven new color options for stripes including full-length dual racing stripes available in blue, orange, red and yellow. Although it doesn't go as far as to make any vintage livery claims, combining the Rapid Blue paint job with the new orange racing stripes gives the Corvette a Gulf Racing livery appearance. Likewise, the blue stripes combined with the Arctic White paint job are a throwback to Briggs Cunningham's Le Mans-racing Corvettes from the '60s. Chevrolet also teased examples of how a black Corvette with look with red and yellow racing stripes.

In addition to these new colors, the only other noteworthy year-over-year changes include a new Sky Cool Gray/Yellow Strike interior color as well as the expanded availability of the road-hugging Magnetic Selective Ride Control. Previously, this suspension was only offered with the Corvette's Z51 package.

Chevrolet did not say when production of the 2021 C8 Corvette would commence, but it did confirm that pricing will carry over unchanged. That means if you want a coupe, you're looking at a starting price of $59,995, and convertibles will start at $67,495.