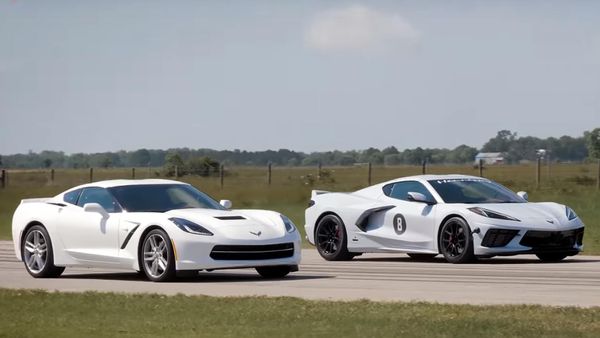 If you're debating between a front-engine and mid-engine Corvette, you need to watch this video!

As much fun as it will be to seeing what tuners can do with the all-new 2020 Chevrolet Corvette, it's equally cool just seeing what kind of performance this car has right out of the gate. Hennessey Performance has already showed us how the C8 does in a head-to-head race with a 2020 Shelby GT500 as well as what it takes to get the C8 to top 200 mph, and now the Texas-based tuner is giving us a baseline for the C8's performance improvements by pitting a lightly tuned C8 against a bone-stock C7 Stingray.

Okay, this race wasn't exactly a fair fight since the C8 was equipped with stainless steel exhaust, lightweight wheels and Hoosier racing tires, but it does show the performance potential of the Chevrolet Corvette both in terms of what these cars are capable of straight from the factory as well as what some minor tuning can do. If nothing else, this video is a testament to the Corvette whether you want a traditional front-engine C7 or a cutting-edge mid-engine C8.

In Hennessey's head-to-head drag race, the C7 is given a slight advantage off the line, but the C8 quickly catches up and puts about a two- or three-car gap on its predecessor at the line. In terms of speed, the modified C8 hits a top speed of 133 mph when it crosses the line, while the stock C7 tops out at 124 mph. Surprisingly, the C7 does even better in a 20-mph roll doing a better job keeping up with its more powerful counterpart losing by only about a single car length in the same distance.