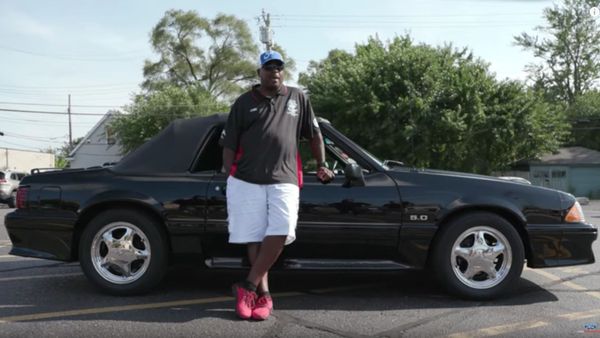 What a foxy pony!

Ah, the good ol’ days when car enthusiasts could gather together for big events like the Woodward Dream Cruise! Ford Performance was at last year’s gathering, which marked the 25th anniversary of the event. They were out interviewing people with nice Fords, including this absolutely gorgeous 1993 Ford Mustang GT.

Owned by John Jennings, it’s obvious the man takes deep pride in his vehicle. You might not believe it, but the paint, top, and powertrain are all original. A lot of these Fox Bodies were unfortunately abused and heavily modified, so to find one in factory condition like this one is pretty phenomenal. Jennings is the third owner, so the guys who had it before also must’ve realized it was something special. Now, before people start complaining it’s true the wheels aren’t original, but they look good so we’ll let that one slide.

What’s more, Jennings says he does drive the car instead of just letting it sit in his garage. We seriously doubt he drives it when the weather’s bad and there’s no way he leaves it in a grocery store parking lot.

The collectability of Fox Body Ford Mustangs has been on the rise lately. Once passed over by collectors, now people who grew up around the pony cars who now have a lot of financial means feel a nostalgic pull toward them. This always results in the value of a vehicle increasing. Older enthusiasts are probably mystified or amused by this phenomena, but younger enthusiasts are more likely to be lusting after this car.

Not everyone is a huge fan of the Fox Body Mustangs. They had a polarizing design, and I know someone is going to be offended by my saying that, but it’s true. That doesn’t mean I think they’re ugly, but a fair amount of people do. On top of that, Ford kept the third-gen Mustang around extra long because of a stupid and failed attempt to transform the muscle car into a front-wheel-drive, turbocharged Mazda.