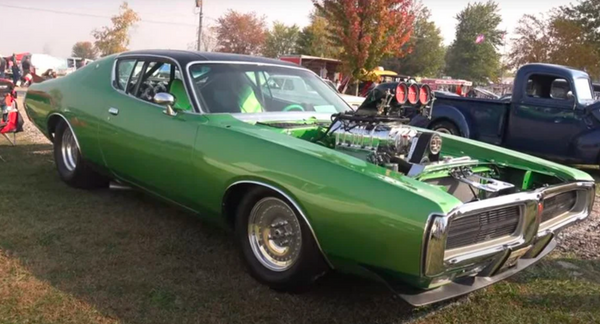 The story of a man and his car, one of rebirth, triumph, and victory!

The 1971 Charger is often considered to be the lesser-known little brother of the great 1968 that we've all come to love. That is, however, not to say any less of it. The Charger nameplate has always meant something in the minds and hearts of Mopar loves across the United States Dodge has become almost synonymous with the phrase 'American performance.'

With such a great reputation for performance, you may find yourself asking the question 'How could it get any better than this?; My answer to that is a simple one…try on four different engine swaps, a huge blower, and a car that boogies down the quarter mile in a breeze.

That's right, in the 41 years of tuning and racing that this beast has endured the engine went from its original 383 V8 pumping out just 345 horsepower to a 440, then to another 440 with a big ole’ blower, and finally he settled for the current 540 indie engine the car has now. We all know the saying 'There is no replacement for displacement,' but it looks like this guy just couldn't decide which one he wanted, so naturally he picked both.

On top of that ridiculous engine, this monster has a 1071 supercharger helping to bring those horsepower numbers up to 1,200 muscular horses. Of course, one can not have ridiculous power without the ability to stop this old girl. So to prevent untimely death and more importantly damage to the car she's got Wilwood disc brakes. The owner says that, unfortunately, he hasn't gotten the car tuned to its full potential yet and so it hasn't hit the strip yet. However, his current aspiration for the car is an 8.5-second, and yes for any other car that would be an ambitious claim. However if there is a lesson to be learned here it would be, never doubt a Dodge.