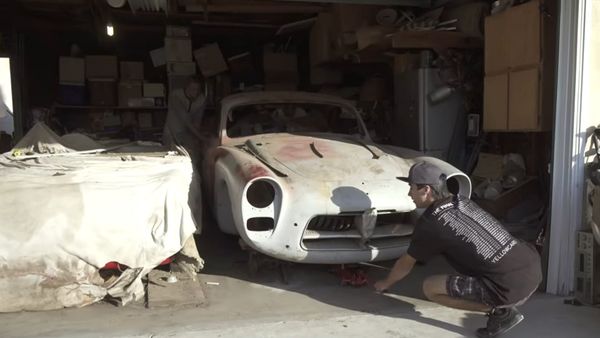 Of course it was uncovered by a master…

When it comes to hunting down barn find cars, Tom Cotter literally wrote the book. The man is always entertaining to watch on Barn Find Hunter because he comes across as genuine, not one of these characters you can tell is putting on some contrived show for the cameras. His knowledge of cars is immense, but his most important skill is he knows how to talk to people and gain their confidence quickly. You see that all on display during the episode attached to this post.

Check out these barn finds that never stood a chance!

This episode takes place in Southern California after a viewer contacted Tom about a rare car he had stored in his garage. It’s a 1952 Pegaso Z102, a car which was made in Spain but wears a French body. The thing isn’t complete, but it’s also not rusting out and falling apart.

With only 85 Pegaso Z102s built, these are rare beasts, which is why so many people haven’t ever heard of them. This one is number 35 and to think it was buried under some junk in a garage is just incredible in more ways than one.

The good news is even though the car looks to be missing pretty much all the parts, they seem to be scattered in with the junk surrounding it. That includes the Hemi V8 and transaxle, which both appear to be factory-original. The plan was for the car to be fully restored, although that might still be going on.

As is usual with these episodes, Tom checks out a couple of other places with some interesting finds, most of them classic American rides, including a 1974 Plymouth Road Runner GTX.

Admittedly, this is an old episode of Barn Find Hunter but maybe you didn’t catch it or you forgot what happened. It’s definitely worth watching again, especially in the days of so much social unrest when there’s plenty of bad to focus on. Also, it’s from early in the series so you can see what’s changed and what hasn’t. Check it out and marvel at the million dollar barn find he uncovers.