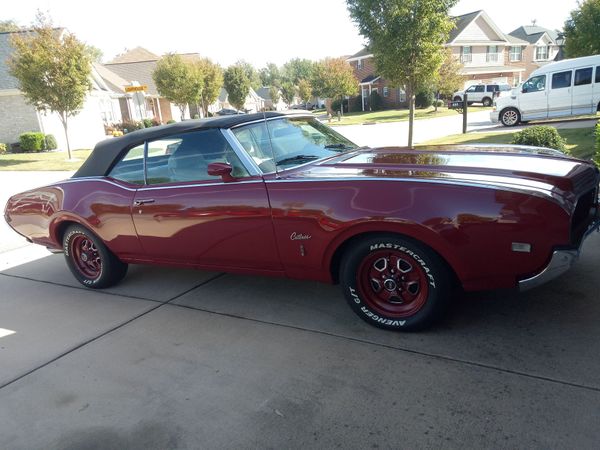 When there's no replacement for displacement, just use one of the largest engines GM ever built.

Straight from the factory, the 1969 Oldsmobile Cutlass was an impressive muscle car, but if you wanted max performance from this car, you had to go with models such as the Hurst/Olds or 442. Another answer, of course, is to just swap a bigger engine under the hood, and that's exactly what the seller of this Cutlass did.

It's not clear what engine graced this engine compartment from the factory, but today there's a Cadillac-sourced 472 cubic-inch big-block V8. This engine was used from 1969 until 1974 with horsepower ratings that varied from 205 horsepower all the way up to 375 horsepower. According to the listing, the engine used in this Cutlass is the latter with 10.5:1 compression that gave it a power output just under the what the ultra-rare Hurst/Olds delivered.

Perhaps in an attempt to make this drop-top Cutlass the ultimate sleeper, the exterior wears a brand new coat of paint in an understated shade of dark red with a matching set of Super Stock II wheels wrapped in new white-wall tires. The two-tone interior is equally new with white seats and door panel inserts to give the cabin a luxurious look and feel. The full center console adds to the fancied-up interior, while a modern stereo system makes driving even more enjoyable with the top up or down.

If you're looking for a classic sleeper, then GAA Classic Car Auctions has just the car for you. This 1969 Oldsmobile Cutlass Convertible has understated looks and hides a monster V8 under the hood, and it will cross the auction block on Friday, July 24th.