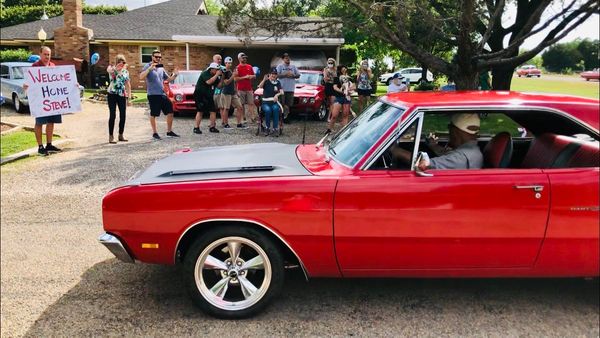 Over 50 cars joined in to support one of their own in a heartfelt and unexpected surprise.

National and local car events have been canceled left and right thanks to a pandemic that reared its ugly head at the beginning of 2020. That didn't stop many classic car owners from getting together and forming a parade to welcome home one of their own on a Friday afternoon.

One of the organizers of a local Memorial Day car show that was canceled was recently released from Baylor Scott & White Hillcrest Medical Center in Waco, Texas. Steve Nors, 61, spent a long four months to the day in the hospital where he was battling pneumonia and a blood infection after receiving open heart surgery.

To his surprise, over 50 cars had formed a parade to welcome Nors back home. Three local car clubs joined forces including the Heart of Texas Old Car Club, Brazos Valley Muscle Cars, and the West Cruisers, to surround Steve's home in Elm Mott.

"I couldn't believe it," said Nors. "There were so many cars."

The parade consisted of classic cars along with tractors, police units, and even street sweepers.

"They even brought out the TYMCO sweepers," said Nors. "I just can't believe what happened,"

Nors was a former technician for TYMCO Inc. After a lengthy stay away from home and calling a hospital room home for four months, the heart-felt gesture and unexpected surprise brought Nors to tears.

His leg had deteriorated from being in the hospital for so long, but he did start out-patient therapy the week after coming home. The one thing Nors looks forward to most is getting back behind the wheel of his Pontiac GTO, and to start planning next year's car show.

Despite the pandemic and everything happening around the world, there is still some good left out there. Car enthusiasts tend to be a tight-knit group of people, and we are happy to hear that Nors has that kind of support from his fellow friends and car lovers. Check out the video at KWTX.