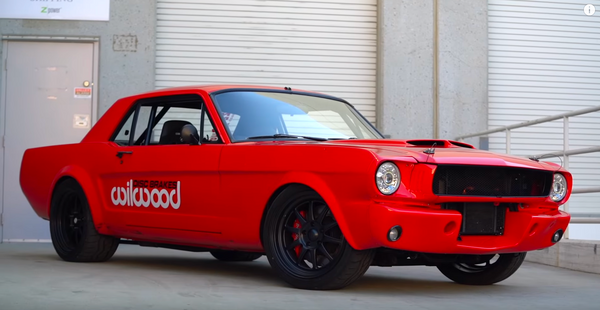 Check out this insane build!

This is Wilwood’s test car, a T-Code 1966 Mustang. However this is not just any Mustang, you see while the stock T-Code Mustang came with a straight-six under the hood this glorious horse is sporting a whopping 5.0 liter 32 valve V8 cranking out some serious horsepower numbers.

Of course with an engine that massive in such a tiny car there had to be some modifications done so they ditched the stock suspension set up and went for a full TCI chassis for the ultimate suspension set-up. The thing that makes this car most unique is the fact that outside of some minor tuning the engine is completely stock, this is compared to most builds where the engineers go crazy with the engine modifications and have the car pushing the 1000 horsepower barrier. The reason for that is because this is a driver’s car, not just a race car.

You can daily drive this insane Mustang, take it to the track, kick everyone’s butts, and then drive it to the next event without skipping a beat. Speaking of the track, there is a need for safety concerns in this car either because it's also got a full cage to provide rigidity and safety. The suspension is fully adjustable RideTech suspension and the engine is also mated to the T56 Magnum. The exterior is meant to look as much like a stock 1966 Mustang as possible, however, the wheels and tires on this thing are almost impossible to fit without rubbing stock so it does have some minor body modification. The front is a Maier Racing fiberglass front end with a 2-inch flare and a 3-inch flare in the back.

These inconspicuous fender flares are hiding some 315 in the back and 275 the front on Falken tires. Looking at the wheels you can see that the front calipers are red and the back calipers are knuckle, the front is carrying a new lug-drive system in which the hat and the rotor are connected by a spring clip. This car has everything you could ever want in a car, classic or otherwise, and to top it all off it's also got Wilwood pedals, manual brakes, and air conditioning making it an awesome street car and track car.