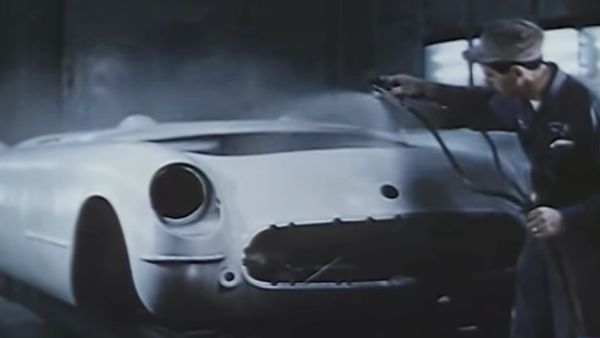 It’s no wonder these classic American sports cars are so valuable today.

With WWII in the rearview mirror, American GIs not only were back at home with cash in their hands, they also had gained a taste for European sports cars. Realizing this, GM launched Project Opel in 1951, which led to the creation of the Corvette. Even the name of “America’s sports car” was geared at those who had served in the military. Revealed at the 1953 Motorama, people clamored for the new car and GM scrambled to make a first run of 300.

1953 Chevrolet Corvettes are by nature rare. What you might not realize is they were also all made by hand, as you can clearly see in the video below. Armed with this knowledge, there’s no looking at the sports car differently in the future.

Just as amazing is how GM assembly workers dressed to assemble the Corvettes. Frist off, they’re in getups which look more like what you’d expect a soda fountain employee to wear, but that was the mode of the time. Secondly, they were wearing minimal protective gear like masks and gloves. Working with fresh fiberglass and the other materials used in the process without much protection surely had its consequences. After all, the guy painting the cars has no mask or gloves!

Check out the home video below of the process. Sorry for the weird buzzing in the audio. If that’s going to bug you, mute your volume. The video is pretty interesting to watch and there’s no actual sounds anyway, just visuals of the cars being made.

You know someone is trying to pull a fast one when they claim to have a 1953 Chevrolet Corvette and it’s any color other than Polo White over red. To get the cars out the door quickly, GM made all the first-year ‘Vettes identical.

Everyone is fascinated with Chevrolet Corvettes, and now there’s a way to possibly win one in the Dream Giveaway. For more details, click here.