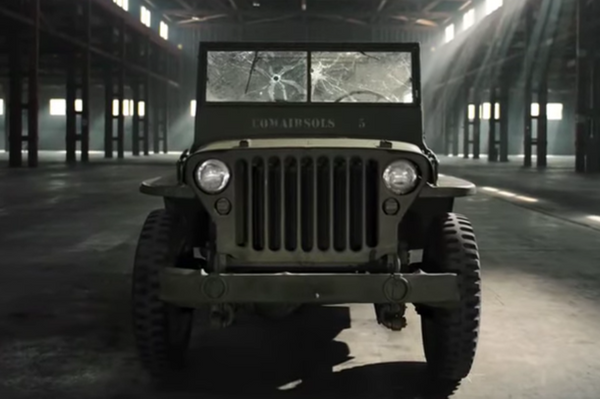 In a time of darkness, this is a reminder of how the Allies pressed on to brighter days.

Almost four years ago Jeep released one of its most impactful commercials ever. Pretty much everyone knows Jeeps were instrumental in helping American forces during World War II but not many are aware of Old Faithful. The story of the Jeep awarded an honorable Purple Heart shows just how much US servicemen respected and relied on these vehicles.

The commercial below was shot to commemorate Jeep’s 75thanniversary. Quite frankly, it’s probably one of the best if not the best car company anniversary celebrations we’ve ever seen. Some people no doubt just watched the 30-second TV spot and then never thought of it again. But the story behind this vehicle is pretty amazing.

Old Faithful was on display at the Marine Corps Museum, which is located in Quantico, Virginia. During its active duty it served four Marine generals in the pitched Guadalcanal campaign and the Bougainville invasion, both in the Pacific Theater.

When US forces landed on Guadalcanal, Old Faithful was the first Marine Jeep to hit the beach. It was among the first Jeeps to reach land at Bougainville. It transported high-ranking officers and VIPs on several islands – important work to keep the war effort going. The off-roader was finally retired from active service on December 22, 1943.

During its time on rugged jungle battlefields, this vehicle racked up 11,000 miles. Amazingly, the Jeep still runs, a testament to how well-built and durable the military vehicles were.

One of the efforts which helped fuel the US military machine was war bonds. After Old Faithful was retired, the Jeep sat on display at the San Diego War Bond drive, serving as inspiration for people thinking of buying bonds which would fund activities like building more Jeeps.

As you know, the Purple Heart is only given out to servicemen injured in combat. Old Faithful was damaged when shrapnel punched through the windshield in two spots during the Japanese shelling of Guadalcanal on October 13, 1942. The vehicle has gone down in Marine and WWII lore, showing that Americans love as well as depend on their cars both in peacetime and in combat.