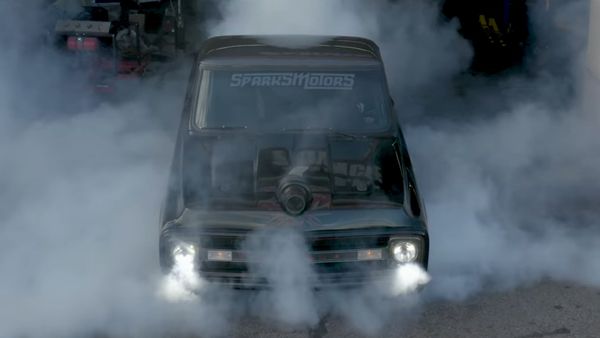 Look at it go!

Not everyone is into trucks slammed within an inch or two of the pavement. After all, trucks usually ride high and were designed that way for multiple reasons. While this 1969 Chevrolet C10 does sit quite low, its cantilever coilover hydraulic suspension can change that in no time. Plus, the fully-built 6.6-liter LBZ Twin-Turbo Duramax engine produces at least 800-horsepower for some amazingly smoky burnouts. Seriously, you at the very least need to watch the video below of it just roasting the rear tires, it’s so much fun.

This build has a lot of goodies, including a hand-built tube chassis and roll cage with removable floor so the whole cab can be lifted off. As for the body, it’s been shaved and molded for that perfect look. You also get to see one of the massive turbochargers peeking out of the hood. Nothing about this C10 is subtle and why should it be?

Obviously, this C10 was built by professionals. Actually, it was The Diesel Brothers who worked on it, doing the job for Charity Air Ambulance and the owner of the company, Cheyenne Lord. This build is extreme, but it was created to be driven on public roads, which apparently it does quite well. It also does amazing burnouts we absolutely have to approve.

You might be sitting here thinking this heavily modified Chevy C10 looks really familiar and that’s probably for one of two good reasons. After all, it was on Season 3 of The Diesel Brothers for 3 episodes while they worked on it, so if you watch the show you’ve likely already seen it and you don’t forget a build like this. This truck was also part of the Barrett-Jackson Scottsdale auction in 2019 where it sold for $96,800. We’re not sure who ended up buying it, but whomever it is hopefully has been roasting plenty of tires since it’d be a shame to not.

If you want to know even more about this truck, check out this podcast with Cheyenne Lord.