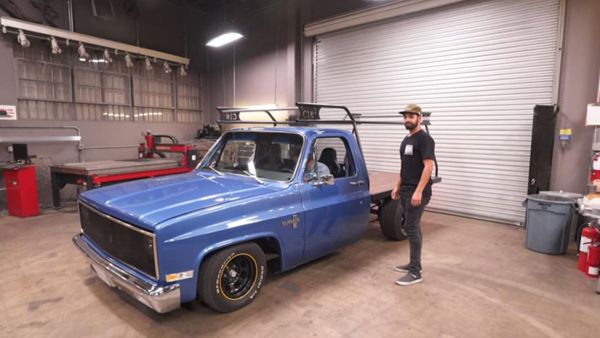 It doesn’t look like much, but that’s the whole point.

By now everyone knows that performance pickup trucks like the Ford Lightning, GMC Syclone, and Dodge Ram SRT-10 can give muscle cars and sports cars a serious run for their money. However, a lowly old Chevrolet C10 flatbed doesn’t look nearly as threatening as those sport trucks, and that’s the genius of this 565-horsepower build by Glen Dederick.

It’s great how the video starts out with this truck doing a proper burnoutinside a garage – you don’t see that every day. Once you’ve seen a little of what the Chevy can do the natural thing to wonder is how it’s built.

First off, the C10 is on a racecar chassis with quite the suspension in the front and rear. The cab is from a ’73 while the hood and front clip are off an ’81. That explains the low ride height and mean stance. There are few exterior cosmetic changes, but the headlights are hidden behind the grille for a sleeker appearance. Oh, and there’s a rack added to the flatbed, so that distracts from the more aggressive changes, maintaining some of that wolf in sheep’s clothing vibe.

If anyone were to look at the cab, they would immediately know this truck is heavily modified. There are racing-style bucket seats, a flat-bottom steering wheel, plus all kinds of aftermarket gauges in the dash and center console.

The other dead giveaway is the sound of a 383ci stroker V8 firing up and rumbling at idle, let along the roar it makes at WOT. Plus, Dederick says this truck weighs about 3,600 pounds but the engine is pushing 565-hp, so that’s quite the ratio. What’s more, that engine sits low and far back, so even with the rack the center of gravity on the truck is impressive.

Check out the video, because they dive pretty deep into the technical details of this truck.