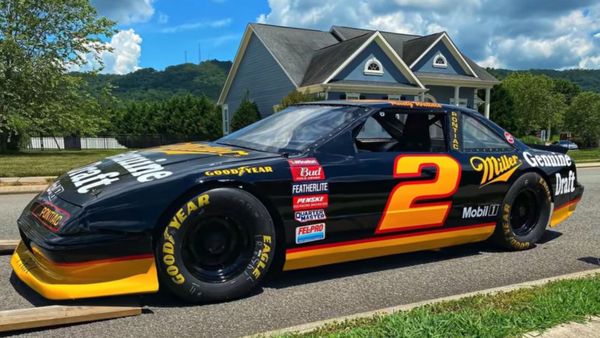 Some guys get to have all the fun…

Rob Pitts, aka Rabbit, has quite the successful car business. When you’re constantly scouring for unique, fun cars you’re bound to run into something just insane sooner or later. The man found just the thing when a street-legal Rusty Wallace road course stock car showed up for sale on Facebook. It’s not every day you find a NASCAR race car for sale, but Rabbit actually blew it off and didn’t think much of it. That’s when a friend who’s a bad influence stepped in.

We all have these buddies who encourage us to do things we otherwise would dismiss in a second. This friend sent him the link to the stock car a few weeks later. That friend encouraged Rabbit to buy it because they supposedly “needed” it.

However, Rabbit wasn’t hot on the idea since he had experience with race cars and knows they’re money pits. The man is in the business of acquiring vehicles which he can sell for a profit, not lose a bunch of cash on, so he still wasn’t interested.

Still, Rabbit talked to the owner of the car, who went on about how he’s such a Rusty Wallace fan. The guy restored the stock car back to how it was back in 1992. The question is if he’s such a fan, why did he want to get rid of the vehicle?

The answer was that the wife didn’t want it around anymore. That’s the story far too often with hobby cars and we think it’s sad. In fact, we actively encourage women to be involved in the hobby and hope readers are, too. If a new generation of women find performance vehicles to be cool, we’re convinced there would be far more marital bliss in this world.

As you probably already suspect, the story of what happened with this car is pretty crazy. It involves some twists and turns, and not all of those are to the left. Check out the video to get it all in Rabbit’s words and see what buying a NASCAR road course car can lead to.