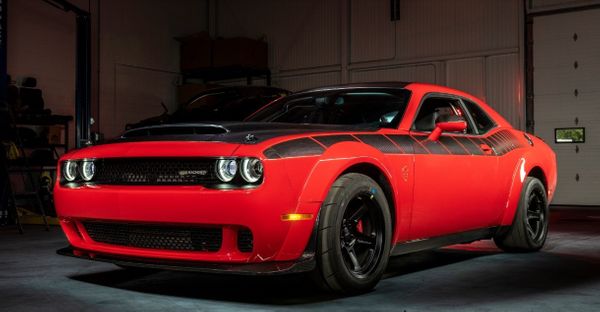 The Dodge Demon just got a lot more menacing!

SpeedKore has wowed the car community with its insanely cool carbon fiber creations over the years. From a custom 1970 Cuda for comedian Kevin Hart to an awesome 1970 Mustang Boss 302 for actor Robert Downey Jr., the next project always seems to trump the last. However, SpeedKore’s latest creation might just take the cake.

The premise of the project labeled Big Machine is simple. Take the baddest street car Dodge has ever made, give it a modest nudge of power, and lighten it up with some of the finest carbon fiber body panels ever made. The result is a hellacious beast that does not disappoint. However, the execution is a bit more complicated.

Gearhead Fabrications spearheaded the mechanical upgrades that give this Demon an incredible 980-rear-wheel-horsepower. They replaced the stock forced induction system with a Whipple supercharger and added a new cold air intake and a wider throttle body to provide more air. While a DiabloSport E85 tuning module, Fore Innovations triple-pump fuel system, and larger fuel injectors from Injector Dynamics refine and optimize the fuel delivery system.

As for SpeedKore’s part, nearly every single part of this car, inside and out, is made of high-quality prepreg carbon fiber. Finishing off the subtly extreme carbon-fiber bodywork is a set of 20-inch HRE Series C105 forged three-piece wheels wrapped in high-performance 315/30ZR20 Pirelli P Zero Corsa tires. This car really exemplifies what SpeedKore does best which is to make minimalist design changes while reducing weight and increasing power. Additionally, its finishing process is nothing short of breathtaking.

Since it is not yet known what the Big Machine is capable of as far as 0-60 and quarter-mile times, we will just have to use our imagination. A good place to get started though is the stock Demon specs, which take an overweight Mopar with less power through the 62-MPH sprint in 2.3-second and down the track in 9.54-seconds.