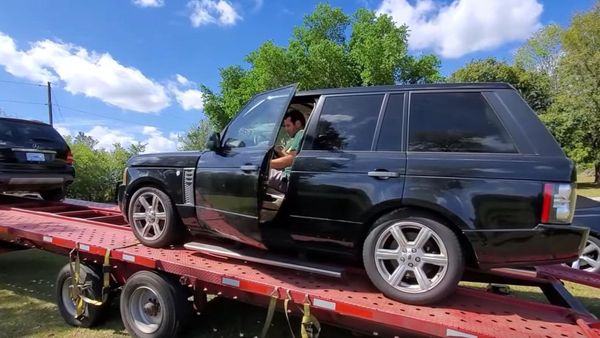 Yeah, that’s not going to buff out.

We’ve seen some unfortunate incidents of cars being damaged while being transported, including a 429 Mach 1 Mustang which was crushed in an accident recently. Sadly, these kinds of tragedies have been happening for a long time, but it’s especially tragic when a classic muscle car is involved. Fortunately, this incident involved a budget-friendly Range Rover and the owner, Samcrac, fixed the damage, but it still illustrates how risky it is to unload vehicles from a transporter.

All it took was one of the ramps on the transporter slipping as the Range Rover backed off and in no time the front end of the luxury SUV was damaged. As Samcrac notes, while the damage wasn’t severe it would’ve been quite expensive had an insurance company been involved. That really makes you think, doesn’t it?

The Land Rover Range Rover in question cost under $4,000 at auction, so it at least wasn’t a pricey new model. Samcrac actually specializes in buying high-end vehicles from the insurance auctions, fixing, then flipping them for a profit. He makes doing the repairs himself look easy, but before you scamper off and decide this is a great get-rich-quick scheme, realize the man has a lot of skill and experience.

The good news is the truck driver felt bad about the incident, per Samcrac. The damage was all due to one of the ramps failing and Samcrac could’ve justifiably freaked out on the guy and refused to use his service again. Instead, he realized this was just a freak accident and stated he “wouldn’t hesitate” to hire the transporter again. How about that for being a class act?

As a bonus at the beginning of the video, if you haven’t already watched it, Samcrac has included some footage of cars getting damaged while being unloaded from transporters, including his personal Ferrari. It’s painful to watch, but at least you know you’re not having to pay for the subsequent repairs.