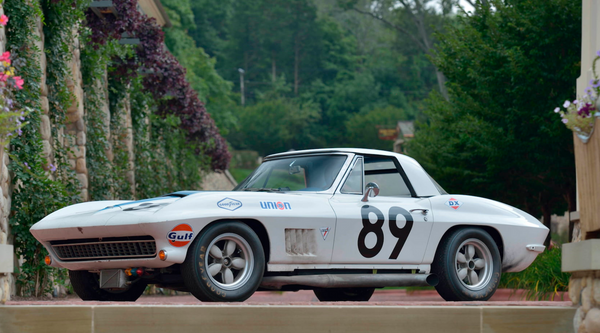 Deemed the 'Ultimate L88', this rare classic is expected to reach a staggering hammer-down price of $5 million at Mecum.

Rare and collector cars tend to sell for a king's ransom at auction often fetching hundreds of thousands - if not millions - of dollars. One particular ultra-rare 1967 Chevrolet Corvette may just break the record as the most expensive one to ever be sold at auction. This classic L88-equipped 1967 Corvette convertible is expected to reach a staggering hammer-down price of $5 million.

Why would it go for so much? This Corvette is just one of 20 examples for the 1967 model year equipped with the high-performance L-88 package. According to Mecum, this model has been dubbed the "Ultimate L88" with this one being the finest example ever offered. An ultimate car comes with an ultimate price tag, and this one should fall somewhere between $4 million and $5 million when it's all said and done.

The L88 was introduced by Chevrolet to turn "America's Sports Car" into a race-oriented powerhouse. Under the hood sits a 427-cubic-inch big-block L88 V8 engine mated to a 4-speed manual transmission that shifts over 500-horsepower to the pavement. Not only that, handling was drastically improved with the addition of a heavy-duty suspension. To save weight, the car lacks a heater, fan shroud, and radio.

Making this particular '67 Corvette (serial number 21550) even more special is the fact that engineer Cliff Gottlob started the car's racing career. Gottlob, a Kansas local, bought the car when it was brand new and drove it to and participated in the 1970 Daytona 24-hour race where he nabbed second place in the GT category and 11th overall. Until 1975, Gottlob continued to race the L88 -equipped car. In 1978, the car went under the knife for a full restoration after being snatched up by Jim Krughoff and David Burroughs.

Still retaining the original L88 V8 engine, this '67 Corvette is in flawless condition. Just in case the buyer doesn't want to add any additional mileage to the original engine, the car comes with a spare mill. Also included with the sale are old-school photographs of the car racing back in the '70s, an original window sticker, factory ID card, and dealer invoice.

As of now, this rare Corvette has a current bid of $150,000. In order to become the most expensive Corvette ever sold at auction, the car needs to top the $3.85 million winning bid placed on the red 1967 Corvette coupe that was sold back in 2014 at Barrett-Jackson. The Mecum website has this car estimated to reach the aforementioned $4 million to $5 million which would make this rare L88-equipped 1967 Chevy Corvette the priciest Corvette ever to cross an auction stage.