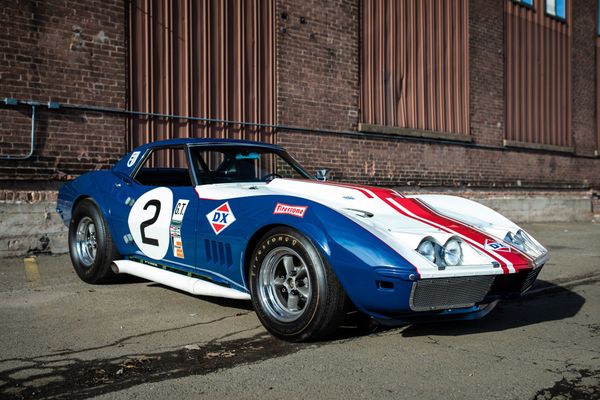 This 'Vette was built and raced by Chevrolet performance tuner, Don Yenko.

There are several ways for a car collector to get invited to a concours d'elegance, but the easiest way is to own a significant racecar with documented provenance. This 1968 Chevrolet Corvette being sold through GT Motor Cars is exactly that. Not only was it built and raced by Don Yenko, it is powered by the Corvette's legendary L-88 engine, and in its day, it competed in some of the top endurance races in the U.S.

This racecar has an interesting story that begins with Yenko waiting for a Corvette L-88 to race at the 1968 24 Hours of Daytona. When that factory-built car failed to arrive in time, Yenko grabbed a hardtop convertible Corvette off his dealership's showroom, and he swapped out that car's factory L-71 427 V8 for a L-88 427 – this engine was factory underrated at 430 horsepower and actual real-world power figures put this engine at 560 horsepower. This engine is topped with a Holley 850 CFM four-barrel carb and backed by a Muncie M-22 four-speed manual.

Three Yenko/Sunray-DX Corvettes were built for Daytona, and these cars swept the podium with the car you see here coming in second place. The car then headed to Sebring wearing the No. 2, and it set a GT Class lap record before retiring due to mechanical failures. Yenko also won the 1968 SCCA Midwest Division road-racing title in this Corvette. Although it was invited to race at the 1968 24 Hours of Le Mans, it was never able to participate due to a postponed race and the eventual Sunoco buyout of Sunray-DX, which ended this livery's strong 1968 racing season.

In 2008, this Corvette was restored back to its 1968 Sebring livery, and it has been recognized with prestigious awards such as the NCRS American Heritage Award and Bloomington Gold Special Collection. The listing even includes some original pictures from this car's racing days. Bottom line, you're going to be hard-pressed to find a Corvette with more racing provenance than this one!

If you want a turn-key, concours-quality racecar, this is it. For more information on this Yenko-raced L-88-powered 1968 Chevrolet Corvette or any of the other classic and collector cars they have listed for sale, contact GT Motor Cars today.