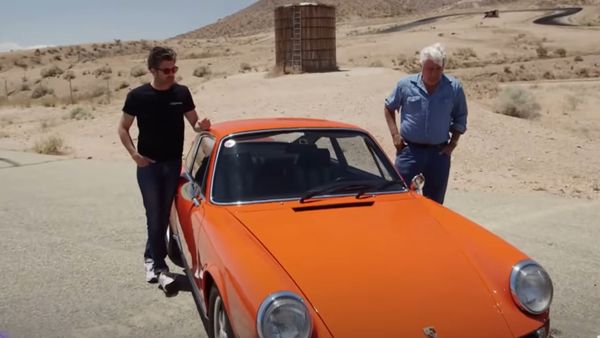 When you’re Jay Leno and you not only have a huge collection of cool cars but also a hit TV show, you naturally attract attention-seeking celebrities. Thankfully, Leno seems to filter out most of those who would just use his platform to simply aggrandize themselves. Case in point is this episode where actor Patrick Dempsey shows up to drive a 1973 Porsche 911 Carrera RS 2.7, which is worth close to $1 million. After all, what are friends for? Since Dempsey is an actual race car driver, he’s a good guy to have behind the wheel.

You probably already know the Carrera RS 2.7 is considered a holy grail for many Porsche fans. That’s especially true here in North America, where we didn’t get this hopped-up version of the first-generation Porsche 911, thanks to it not meeting US emissions standards.

The current chairman of the Porsche board, Professor Ernst Fuhrmann, saw that good race results fueled car sales. That’s why he pushed for a lightweight, more powerful version of the 911. At a time when high oil prices and increased emissions standards were a dominant factor in the market, the first Carrera RS used a 2.7-liter flat-six instead of the 2.4-liter engine. That meant a boost to 210-horsepower, which was plenty to get the car that weighed just over 2,000 pounds moving from 0-60 in under 6 seconds. It also could hit 155 mph. While the Porsche 911 Carrera RS 2.7 was still seen on this continent during races in RSR form, a road-legal version wasn’t available until 1974.

In other words, the car you see Dempsey carting Leno in was originally sold in Europe. Even if it had been sold in the United States for 1973, these cars would fetch a pretty penny. But the fact they’re unicorns here makes them far more valuable.

Many Porsche fans still feel the first-generation 911 Carrera RS is the best car ever made by the company. It’s certainly one of the most collectible consumer vehicles to wear the Porsche badge. To learn even more about it and see how Dempsey reacts to this classic, watch the video.