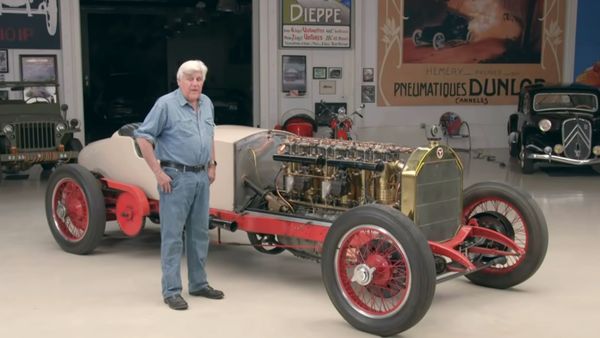 He gets to drive all the cool, quirky cars.

When you’re Jay Leno and you have a massive garage stocked full of some of the rarest cars in the world, you have to prioritize your automotive projects. That’s what happened with this 1921 Mercedes-Benz, which apparently sat in a corner for some time. It would run, but not well at all, however Leno’s team had more pressing matters. Now this car has finally received the attention it deserves and it’s able to be driven on public roads.

We’ve seen the man drive just about every type of vehicle imaginable and he does so with amazing skill, thanks to his opportunity to practice on all kinds of cars. He makes it look easy, but handling such a vehicle certainly takes experience and plenty of practice.

There’s a funny thing about this car. As Leno describes from the beginning, this car is a 1908 Benz-Mercedes. But the car was built in 1921 to race at Brooklands. It actually lapped the track at 113 mph, which was incredibly fast for the time.

As Leno points out, he’s really driving a low-flying aircraft. Actually, he yells that over the roar of the aircraft engine, which as you can hear from the very beginning of the video is noisy. This is the car you want to fire up in the early morning hours on a Sunday to wake the neighbors if you want to start a war.

Having an airplane engine was the way to own a performance car back in the day. This particular engine produces 230-horsepower, which for the time was a lot. Plus, airplane engines were far more reliable versus their automotive counterparts. Even by today’s standards this car is decently quick and can hit some good speeds, something you can’t legitimately say about many vehicles made even 15 years later. It’s a testament to the advanced engineering of Mercedes-Benz. Plus, this is just a fun car to see driven.