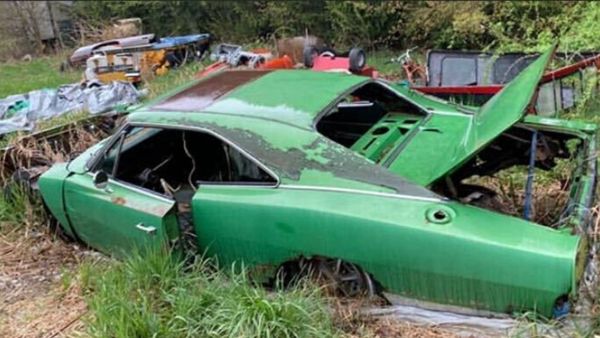 Finally, someone did the right thing.

Pictures surfaced recently on Instagram account mopars5150 of a 1969 Dodge Charger rotting away in a field. That caused an uproar since the Charger has a sunroof, albeit very much covered in rust, and has remnants of a shade of green you don’t see too often. As the comments poured in, mopars5150 revealed they had purchased the muscle car and were planning to fully restore it.

Any 1969 Dodge Charger is going to be worth a fair amount on the market, especially once restored. These Moparsdo tend to rust up quickly without preventative measures, so to see one in this state is sadly not uncommon.

Thanks to the Dukes of Hazard TV show, 1969 Dodge Chargers became rarer than before. During production there were 300 ’69 Chargers smashed up, some no doubt used for parts or crushed.

Many people on Instagram are claiming the paint color on the Charger is rare. That’s difficult to verify since Chrysler didn’t keep records of how many cars rolled out of the factory with each paint option available, of which there were many. Anecdotally, many people don’t see this color at all these days, which is what caused the stir.

Everyone is correct that finding a sunroof on a 1969 Charger is indeed something extremely rare. If this car were to still have its engine and that were a Hemi it would be even more unique, but just the fact you can open up the roof should make all the future restoration work worth the effort.

There are other cars in the distance, but nobody from the Instagram account disclosed the location (probably because they’re going to go back and get more). However, fields of cars like this can be found all over the United States, you just have to know how to network and hunt to find them, then be genuine when approaching the owner. More of these historic cars need to be rescued and restored before they literally become one with the earth.