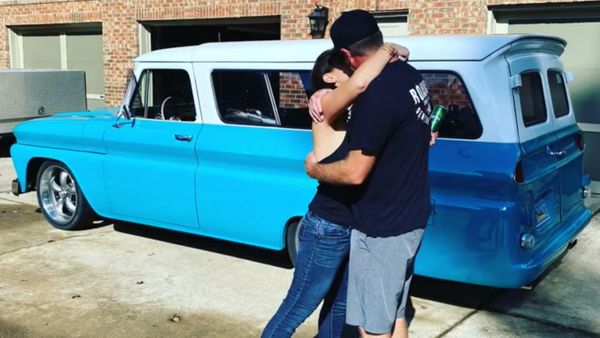 There are many ways to say I love you. You probably have even heard about these “love languages” or whatever. We’re not relationship experts, but we can say that if you’re an automotive enthusiast and you marry a woman who appreciates a good classic car, that’s a smart move. This is clearly demonstrated by Mike Finnegan in the video attached to this post.

To commemorate his 15th wedding anniversary, which we’re told is a big one, Finnegan decided to buy a custom 1966 Chevrolet Suburban for his wife. We had to look it up, but tradition says you’re supposed to buy crystal for the 15th anniversary. Some people interpret that as a necklace or watch, but we think a classic American vehicle like this is far superior.

Even better, this was a complete surprise for the wife. Finnegan was supposed to be at Rocky Mountain Raceweek 2.0 but his car broke on the first day, so he decided to head back home with the surprise on their actual anniversary.

Finnegan seems to know his wife well, because she didn’t ask for the Suburban, but he figured she’d like it. How many wives would get mad at a husband for buying a classic car for her because supposedly it was a present for him? We’re glad this didn’t turn into one of those types of situations.

As Finnegan admits, he’s missed quite a few of his wedding anniversaries throughout the years. The guy was on the road a lot while attending drag races and traveling for work. For some women that would’ve been reason enough to demonize the guy or guilt trip him every year thereafter, but his wife doesn’t seem the type. That’s what makes this video even sweeter, because there’s zero chiding or anything vicious at all.

You can watch the whole journey with the ’66 Suburban in the video or just skip to 27:38 for the big reveal.