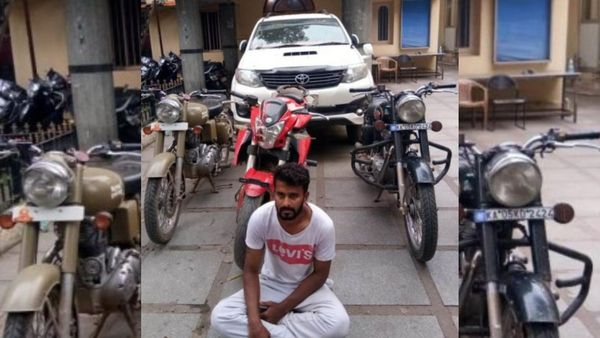 If you’re selling a car, you need to beware this potential pitfall.

After listing their vehicles for sale online, four different owners found their rides had been stolen. It wasn’t until the owner of a Toyota filed a report with the local police that the alleged thief was caught with all three vehicles in his possession. What’s more shocking is that the former mechanic used a large stash of duplicate keys to pull the thefts off without a hitch.

Bharath B M alias Preetham of Channasandra, India was able to abscond with a Toyota Fortuner, a Benelli motorcycle, and two Royal Enfield motorcycles before he was finally caught by police. The man had collected all kinds of keys while working as a mechanic at a dealership. What he would do is show up to take a car for a test drive, then when he returned give a key that looked like the original to the owner while retaining the key that goes to the car. Then he would return later and take the vehicle.

It took authorities doing some good gumshoe detective work to track the guy down, but he’s been brought to justice and all four vehicles were thankfully recovered.

Car scams and theft techniques don’t just stay in one part of the world anymore, so while reading about a guy stealing cars in southern India might not sound threatening to readers in North America, a similar scheme could easily be used around here. In other words, if you’re selling a car you need to be careful. This is just one of far too many scams out there.

We keep pointing out that car thefts are high right now. Part of this is from the coronavirus shutdowns since criminals like to go after vehicles which sit for a long time. Another thing fueling car thefts and which looks to be setting up even more in the near future is the scarcity of new cars and new car parts. With more demand for private vehicles as people avoid public transportation and ride sharing services, there are even more financial incentives to swipe cars.