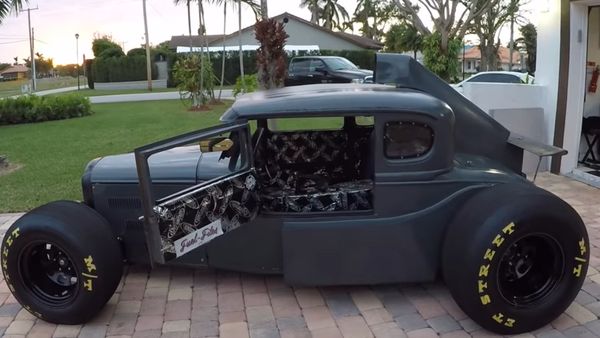 This is the kind of Frankenstein builds we like to see!

We’ve seen a lot of crazy car builds, including a lowrider semi-truck, widebody DeLorean, and a Nissan 240SX with a Nissan Titan engine swap. But just when you think you’ve seen it all, some brilliant mad scientist in his garage comes up with something even wilder and crazier. That’s exactly what this Ford Model A running a Honda S2000 engine is all about, because who would actually do that?

The answer to that question is simple: Ricky Boada. An automotive YouTuber who’s been in the game for about 6 years, he has about 22,200 subscribers, so maybe you haven’t heard of him. About 8 months ago he dropped a crazy video of a Honda S2000 with an LS6 swap. Of course, people were wondering what happened to the Honda’s engine, and now we think we know.

Surprisingly, the Model A looks really clean. It’s been chopped and slammed to the ground with big fat tires, no doubt to handle the huge power bump. Seeing this guy’s garage and the lack of tools, we’re guessing someone else did this build and Boada paid them handsomely for it, a fact he does confirm. Still, it’s cool to see.

That snorkel over the roofline isn’t just for looks – it feeds the S2000 engine which has been put where the rumble seat would normally be. The rear portion of the chassis is straight from a Honda S2000. However, the front is a custom fabrication. There’s also a massive brake light bar on the rear, which is a nice touch.

A note to Ricky Boada, if he’s reading this article: you might want to invest in a windsock for your microphone and probably a better microphone so you have better audio quality in your videos. Plus, people are watching the video to see the car, not you. I mean, we don’t even get to see the engine crammed in the rear. Sure, you might be an interesting guy (although some would debate that) but the car is the star of your video, so step out of the way and really show off the ride.