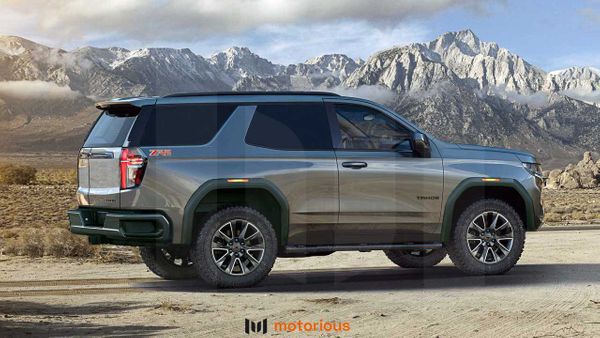 Remember when SUVs used to be exciting?

With Jeep bringing the Gladiator name back and Ford doing the same with the Bronco, it's probably an understatement to say that enthusiasts are disappointed with Chevy's interpretation of a modern Blazer. GM hasn't built a two-door, full-size in over 20 years, and while it's not likely that such a vehicle will ever make a comeback in the Chevy lineup, that won't stop us from dreaming.

Starting with the all-new 2021 Chevrolet Tahoe as a jumping point, we digitally rendered two distinct versions of a two-door, shortened-wheelbase Tahoe: an off-road-friendly ZR2 configuration and a more sinister SS version. Be sure to let us know which one you like better.

With the 2021 Ford Bronco nearly breaking the internet when it was introduced, we created a two-door Chevy Tahoe ZR2 for off-road enthusiasts to ogle. Starting with the 2021 Tahoe Z71, we imagined a more extreme version along the lines of the Colorado ZR2 pickup truck.

This rendering adds old-school elements like a steel bumper and swing-out doors with a separate hinged glass (similar to the Ford Excursion), while the shaved front bumpers allows for a better approach angle. A taller ride height was also added along with wide, black fender extensions that act as a throwback to the original S-10 ZR2, which were needed to accommodate that truck's wider track.

If street performance is more your scene, we also created the two-door Chevy Tahoe SS. Geared toward sportier family haulers like the Jeep Grand Cherokee Trackhawk and the various high-powered SUVs from Mercedes-AMG, this version of the Tahoe features a lowered stance with a monochromatic paint scheme. To further alter the looks of the Tahoe, we tweaked the front fascia to give it a more menacing appearance with a larger lower grille opening and taller, wider vertical air intakes.

Like many of the renderings we see these days, it's not likely that we'll ever see a production version of the Tahoe ZR2 or Tahoe SS, but it sure is fun to see what such vehicles could look like.