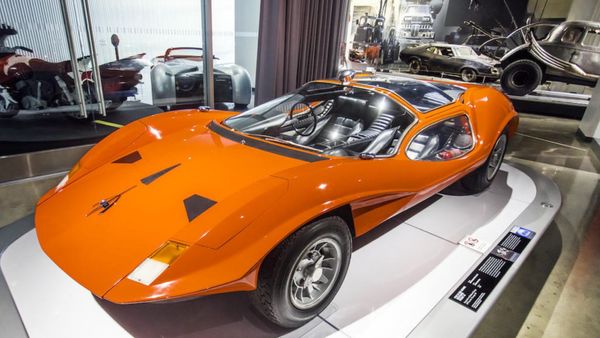 We absolutely love seeing rare, almost-forgotten cars paraded out in public view. And while it’s really nice to see them taken to cruises and shows, an auction can still give plenty of people an opportunity to learn about a classic car they might not even know exists. That’s the case with this 1969 M-505 Adams Brothers Probe 16 which was auctioned by Bonhams recently to the tune of $184,500.

You might recognize this car from the Stanley Kubrick film A Clockwork Orange. Its unique design is something which sticks with you.

While automakers in the 50s were obsessed with rocket-age futuristic designs, especially brands from the US, the fad didn’t completely die out in the 60s. And while most of those crazy designs were used only on concept cars, some like this M-505 Probe 16 made it to production.

The Adams Brothers, named Dennis and Peter, even said this car was created as “an investigation into the extremes of styling.” However, extreme designs can be tricky to pull off and thus expensive, which limited this car to a mere three surviving examples. The first one was lost in a fire and this is the second made. As one can imagine, it’s on the bucket list for a fair amount of people.

Perhaps if the M-505 Probe 16 were better-known this car would’ve fetched even more on the auction block, but nearing the $200,000 mark isn’t too shabby. Using a daring layout for an air-cooled powertrain, the Adams put the BMC 1.8-liter OHV inline-four engine mid-ship and mounted transversely. Just like with Panteras, cooling is a problem, especially at idle.

Thankfully, surviving example has been maintained in its original condition, including the vivid orange paint. Its original owner was bassist Jack Bruce, then it changed hands from one collector to another, so it was in knowledgeable hands.