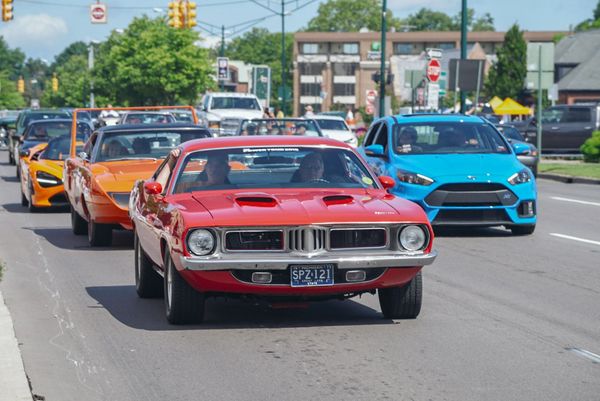 Expect to see a bunch of Trump flags during this cruise.

Like many events in 2020, the 27th annual Woodward Dream Cruise was officially cancelled back in June due to COVID-19, but unlike closed automotive events, this cruise takes place on public streets. That means a large number of people will still be showing up to Woodward Avenue in their classic cars even though there won't be festivities or sponsored events. According to the Detroit Free Press, at least one group – the Oakland County Republican Party – is planning to organize a car cruise/political support rally, which it is called the MAGA Classic Car Cruise.

Designed for "classic car owners who are MAGA loving Trump supporters," the cruise is planned to run a route from 8 Mile to Square Lake Rd. from noon to 4 p.m. on August 15th. These MAGA cruisers won't be alone, though, as the article expects "hundreds if not thousands" of other cruisers to take to Woodward that weekend.

The article also states that the Oakland County Republican Party chairman, Rocky Raczkowski, is asking all MAGA cruisers to "to prominently display American and Trump flags or respectful signs that support President Trump and Back the Blue" and "remember to stay in your vehicle and practice safe distancing protocols."

Since its inception in 1995, the Dream Cruise has operated between the Michigan cities of Ferndale and Pontiac, which are all located in Oakland County. The cruise has grown to become the world's largest single-day automotive event attracting more than one million automotive enthusiasts and more than 40,000 classic cars from around the globe to the Detroit area each year.