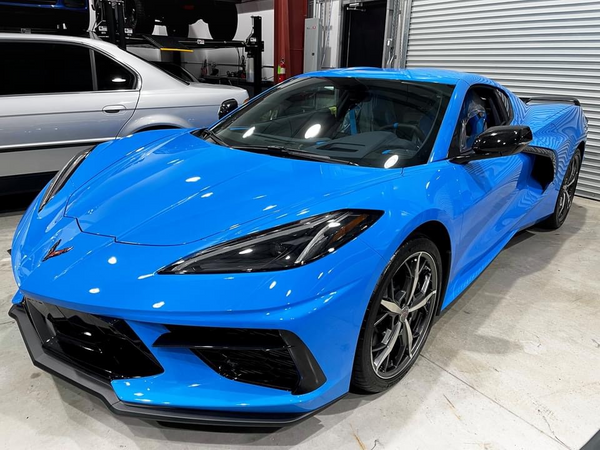 This 2020 C8 is one of only a few hundred made in this configuration.

2020 was, let’s just say, an unprecedented year. In case you missed it, the pandemic hit the US hard and shut down many businesses as well as put a strain on the automotive industry. Translated to what was supposed to go down in the General Motors history books as the first year of the mid-engined Corvette, this meant only half of the Corvettes planned to be made actually were and the final production count ended at just 20,368 examples. 16,787 of those were Stingray coupes and just 3,581 were Stingray convertibles.

According to information from the National Corvette Museum, of the 16,787 coupes only 12,746 were equipped with the Stingray Performance Package (better known as the Z51 package), 7,439 were 3LT models, 1,925 came with Midnight Painted Trident wheels, 934 were finished in rapid Blue, and only 560 came with a Two Tone Blue Leather interior.

Chances are if a 2020 Corvette is spotted with all of these options, onlookers are turning their heads to see an example with less than 560 ever made like it. Moving into 2021, finding one still in the wrapper that has only been test driven a few miles is even more unlikely but Awesome Joe Auctions is offering just that.

This extraordinary example is a well-optioned 2020 year model C8 with just 5 miles on the clock. It features the 3LT trim and the Z51 package and the two-tone black and blue seats are still sporting their original packaging. At the time of publishing, the current bid was up to $105,000 with 258 views and two watching. This is an awesome opportunity to own a rare Corvette and we would love to see a Motorious reader get behind the wheel of this car, but you’ve got to hurry because there are only four days left on the auction.