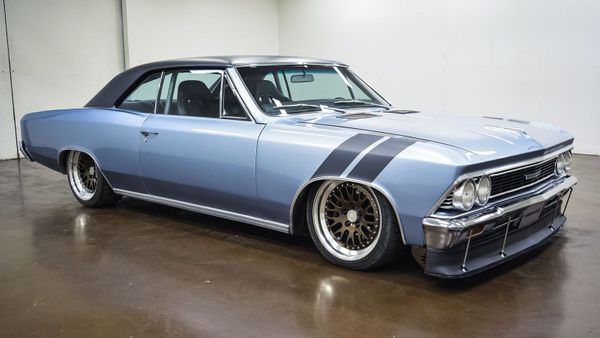 Here are the coolest cars for sale to cool you off this August!

The classic and collector car market is a fantastically diverse tapestry of vehicles from every breed and era. Delving into the classifieds reveals some real gems waiting to find a new home with both enthusiasts and serious collectors alike. Every week we’ll be highlighting the top cars in need of a new home that caught our eye. Here's what we found as we continue to beat the summer heat.

With its NASCAR engine and classic styling, the 1970 Ford Mustang Boss 429 is one of the most collectible Mustang of all time. Adding to this is the fact that only 500 Boss 429s were made in 1970, and this fully restored Grabber Blue example is the cream of the crop.

For good reason, this 1998 AM General Hummer H1 has earned a reputation as being an incredible off-road vehicle. Since these were designed for military operations where soldiers had to go where pavement might be nowhere in sight, these were made to be tough and highly capable. Available to bid on through Awesome Joe Auctions for the moment, this one has a soft side as well, so you can bring the family along for some epic adventures.

Custom trucks always command a little extra presence when rolling up to a car show, and this 1972 Chevrolet C10 is surely going to get attention wherever it goes. There isn't about this truck that hasn't been customized and modified, and if you're in the market for a flashy, show-ready classic truck, this bad boy will be up for auction later this month.

Drive Off In Bespoke Style With This 2003 Panoz Esperante

Coming from a company that specializes in building world-class racecars, it's no wonder that the Panoz Esperante is such an incredible sports car in its own right. This 2003 Panoz Esperante is one of just 28 Esperantes built that year, and it will be up for grabs through Raleigh Classic Car Auctions.

It's hard to think that the 2008 Dodge Viper SRT/10 could get any meaner than the factory made it, but Hurst did just that when it celebrated its 50th anniversary in 2008 with the introduction of the Hurst/Viper. Only 50 of these Vipers were made, and this one that will be up for auction through Leake Auction Company was the very first Hurst/Viper made and it's a one-off creation.

A growing number of people are beginning to realize the Porsche 996s aren’t bad cars at all, despite some purists branding them as horrible since they were the first of the water-cooled 911s. That means values could very well rise dramatically over the coming years, making this a great time to scoop this 2004 Porsche 911 Turbo Cabriolet from Motorgroup Auto Gallery.

If you need any help figuring out what the best decade was for automotive design, look no further than this 1957 Oldsmobile Super 88 Fiesta. With its swoopy body lines, this family hauler was one seriously stylish station wagon, and these cars are as rare as they are beautiful.

Pro-Touring 1966 Chevelle Malibu Will Rock You

Having a gorgeous, head-turning car can be a lot of fun, especially if you revel in the kind of attention it brings. This Pro-Touring Chevelle is just such a ride, thanks to the aggressive modifications to the exterior, like the wild custom front splitter and those cool 18-inch CCW Classic wheels tucked nicely into the wells. That combined with the nice blue exterior, intricate pinstriping on the hood, and dual front fender hash marks like what you see on some of the Corvette Grand Sports makes for quite the statement. However, this car isn’t writing checks it can’t cash.

While it’s true that modern pickup trucks have just grown bigger over the years, you could say the same thing about cars. We could have a discussion about how modern safety equipment and luxuries everyone these days thinks they can’t do without have contributed to the portliness of vehicles today, but that’s another discussion for another time. However, that’s not to say all classic cars are small. Case in point is this Chevrolet 3100 pickup.

1948 Buick Roadmaster Shows How To Tastefully Restomod A Vintage Ride

The idea that a restomod has to be from the muscle car era or feature showy modifications is disproven by this unique 1948 Buick Roadmaster convertible. This Buick will be up for auction through Raleigh Classic Car Auctions, and that vintage body hides a handful of important modern upgrades.